Advertisement
The Newspaper for the Future of Miami
Connect with us:
Front Page » Arts & Culture » Plaza Coral Gables advances, adds funding for public 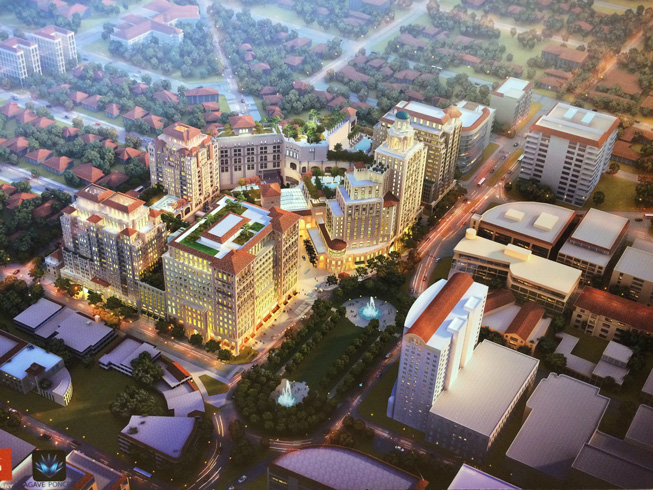 The Plaza Coral Gables’ second amended development agreement passed unanimously in the city commission last week with one small change – a $2.7 million gift from developer Agave Plaza Trustee LLC will have its preferred use be for Art In Public Places instead of the city’s new public safety building. The ordinance reads that any amount of it could go to either one, depending on the commission’s decision.

The commission also passed a last-minute resolution that directed City Manager Peter Iglesias to put the General’s House up for sale in about 90 days and use any of the sale money to fill financial gaps for the public safety building.

The $2.7 million is in addition to $4 million base Art in Public Places requirement that the developer is already meeting. The art can either go into the Plaza or adjacent to it, in the Ponce Circle Park.

“I think this is an once-in-a-lifetime opportunity to really deliver on world-class art which will draw people to the community. I think we need to dedicate this money wholeheartedly so that we can have the necessary art budget so that they can deliver potentially one of the biggest draws in Miami-Dade County for the Art in Public Places,” said Commissioner Vince Lago.

The city purchased the General’s House, in the 3000 block of Granada Boulevard, in 1999, according to Mayor Raúl Valdés-Faulí. It will probably sell for about $1.6 million to $2 million, Mr. Iglesias said. This money will go either toward art or the public safety building. The art must come back to the commission for approval.

In addition to the money from the sale of the General’s House, Mr. Iglesias suggested that roadway impact fees could possibly be funneled toward the public safety building, since it isn’t projected to be completed until August or September of 2020.

The amended development agreement also added the possibility of an agreement among Miami-Dade County, the Gables and the developer “to increase the amount of county roadway impact fee monies which could be dedicated to improvements in this area of the city,” and the use of the $2.592 million Mobility Contribution from the developer for “capacity improvements” to the Gables’ mobility and transit system.

The seven-acre, mixed-use Plaza Coral Gables, formerly known as the Mediterranean Village, is set to rise at 2801, 2901 and 3001 Ponce de Leon Blvd., just south of downtown Coral Gables. It will stand 190 feet tall and have one level of retail along with a hotel component in the rear of the complex, creating an open pedestrian space in front of it.

According to the developer’s last update on Dec. 12, the project’s north parcel is under construction and three floors have been built for the components, which include an office tower, a residential tower and some retail. Coastal-Tishman Construction is working on the north parcel.

The projected received its first building permit from the city July 10, which allowed for work on the north parcel to begin. According to the developer’s website, the northern components will take just 21 months to complete. The central and southern parcels will follow the northern construction.

According to the developer’s website, “Coral Gables estimates that the project will provide 1,682 jobs, a payroll of $47 million and an additional $43 million from other economic activity generated by the project.”

The Plaza Coral Gables leasing partners are Blanca Commercial Real Estate for the office space and Koniver Stern Group for the retail. The entire project, geared to achieve LEED-ND certification, was designed by architect CallisonRTKL.