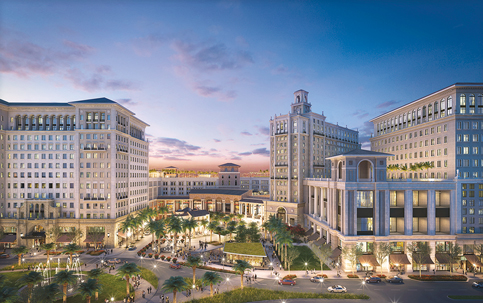 On target to be completed in August 2022, The Plaza Coral Gables is securing major commercial real estate leasing deals and, at the same time, positioning the city as a desirable business district.

The Plaza Coral Gables will have a positive impact on the quality of life and safety of the community through the creation of new spaces for dining, recreation and the promotion of artistic, cultural and outdoor activities, according to developers Agave Holdings.

“This is a unique opportunity for companies that are arriving in Miami-Dade County and also existing companies that are in the market to acquire top-quality space in a location that offers everything you need to enjoy during the day and after hours,” she said. “It’s very exciting to see how we are going into next year with solid leasing.”

By the end of the year, the plaza’s north and south tower office spaces will be at around 40% leased and expected, with the current leasing momentum, to be fully stabilized by the fourth quarter of 2022, Ms. Blanca said.

According to Blanca Commercial Real Estate’s second quarter submarket report, Coral Gables is continuing to attract companies that are new to the market and existing companies. The city currently has 17.1% commercial real estate vacancy. The average asking rate stands at $43.99 per square foot, with 163,700 square feet under construction and 154,436 square feet of direct leasing activity.

The biggest and most notable lease transaction during the second quarter of this year was executed by The Plaza Coral Gables, with ACI Worldwide taking up 27,800 square feet, according to Blanca Commercial’s market report.

“The new-to-market activity that you’re reading about from alternative investment firms in the finance world and that are primarily concentrated in downtown Brooklyn [NY], the great majority of these companies are executed leases here in Coral Gables, which is also drawing great demand from some of the finance and technology companies that are new to the market,” Ms. Blanca added.

The residential building, the Reserve at The Plaza at 122 Sevilla Ave., is now home to over 30 families. The North Tower office building, which is fully operational, has now become the new headquarters for Agave Holdings, along with several other office tenants.

The Plaza Coral Gables towers, which is the newest, most luxurious exceptional product in the market, has been experiencing exceptional leasing activity at the highest rates the market has ever seen, said Stephen Bittel, founder and chairman of Terranova Corp. and operator of 12 commercial buildings on Miracle Mile, along with two more buildings that are under contract to purchase, which should close next month.

“I think as we look forward, Miami-Dade County is clearly a national outlier in that we’ve had so many relocations in the finance and tech world that have occupied newer spaces in Brickell, Coconut Grove and in Coral Gables,” Mr. Bittel said, “and those tenants have come from other markets where they’re used to paying a lot more than our highest rents and that’s provided some positive absorption that otherwise we wouldn’t have seen, and no other market in the country is experiencing.”