Advertisement
The Newspaper for the Future of Miami
Connect with us:
Front Page » Real Estate » 36-story tower replacing City Hall (the restaurant) 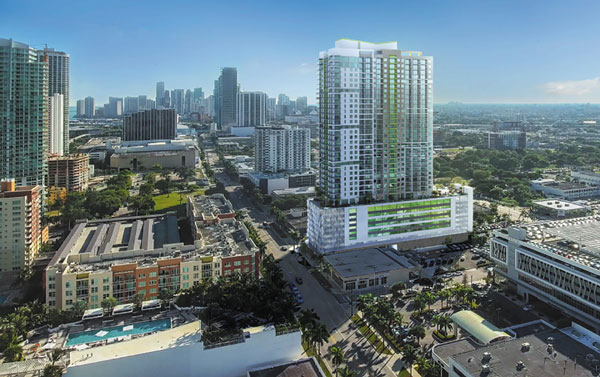 A corner lot on Biscayne Boulevard in Edgewater is being redeveloped as a mixed-use apartment tower.
Developer Verzasca Group plans to build 2000 Biscayne, a 36-story tower offering 393 rental units, an 8-level parking garage for 462 vehicles and nearly 8,000 square feet of ground floor commercial space.
The site was home to the City Hall restaurant, which has been demolished.
The city’s Urban Development Review Board on June 29 recommended approval of the project, with conditions.
Board members generally liked the overall look of the project, but expressed some dissatisfaction with yet another massive parking garage serving as the base of a new tower in the growing Edgewater neighborhood.
The parcel is just over three-quarters of an acre and is north of a curved Northeast 20th Street.
The size of the site and other right-of-way restrictions made the property a challenge for the developer and architect, and led to need for several waiver requests, according to Iris Escarra, an attorney representing the developer.
The area has also been impacted by street changes by the Florida Department of Transportation, she said.
The waivers include smaller setbacks, a decrease in required parking, allowing parking above the second story, and an increase in allowable floor plate and lot coverage.
In a letter to the city, Ms. Escarra wrote, “The project proposes a mixed use building with ground floor retail and a residential component above. This will activate the pedestrian realm while providing residential options in the neighborhood.”
She said the project is within the Omni neighborhood, which has a variety of retail, cultural and civic uses nearby.
“There are several locations which can be reached within a walking distance of the site. The nearby bus and trolley routes provide access to all of Miami for those who do not drive. The project is also within a short walk of Margaret Pace Park, providing park access to all residents right outside their door. Two Metromover stations are located within a half mile of the property,” she wrote.
The architect is JP Singian of the firm Dorsky + Yue International.
Mr. Singian said the property is unique and offered opportunities for a “very dynamic façade,” and street level retail spaces along Biscayne Boulevard and Northeast 20th Street.
All service activity will use an existing alley, he said.
In order to bring something special to the design on the garage levels, Mr. Singian said, perforated metals panels will be installed and open at different angles.
This type of design works to create depth, he told the board, and shadowlines from the structure will change throughout the day.
On the north side of the garage, the developer plans a mural from a local artist, said Mr. Singian.
There was some criticism from the board of the metal mesh being the “go to” material on garage podium facades of late.
Board member Neil Hall made that observation, and said in the past two dozen or so projects the board has evaluated, the metal mesh façade is a factor.
“In the past, we sought to diffuse the notion of a garage,” said Mr. Hall, with podiums having liners and designed so they weren’t so obviously garages.
The metal mesh is redundant and doesn’t have the same appeal it once had, Mr. Hall said.
“You’re using it as an art piece?” asked Mr. Hall.
“Yes,” answered Ms. Escarra. “The pattern makes it alive.”
Mr. Singian noted that most other large garage podium façades are flat.
Mr. Hall asked if it was possible to have lights within the podium to help break up the massing.
Mr. Singian said lights are included.
Board member Gerald Marston made similar statements on the look and size of the garage levels.
He said he understood Mr. Hall’s concerns and the board is seeing more projects where the height of the podium dominates the street.
For a person on the street, the parking levels will be all they see, he said. “All I’m going to see is the podium,” said Mr. Marston.
As for the metal mesh layers being the “go to” design, Mr. Marston agreed, calling it “a weakness in architecture we are seeing these days.”
Mr. Marston suggested adding more variety of shapes and materials, to break up the massing of large parking structures; horizontal uses of mesh screen and glass, instead of “80 feet of massive mesh.”
Board Chairman Robert Behar agreed, suggesting the developer and design team look at ways to reduce the scale of the podium.
Mr. Behar said overall they did a good job designing the project on a difficult site.
“I commend you … this will be a good asset for the area,” said the chairman.
Board member Anthony Tzamtzis commended the developer and architect. “You’ve done a very nice job of distributing the space at the ground level,” he said.
Mr. Tzamtzis did question if there was enough turning space in the parking garage.
The board included two conditions with its recommended approval: that the developer and architect consider ways to make the façade on the eight levels of parking be not so uniform and monolithic, via use of color, shapes and other techniques; and to study ways to improve maneuvering space on the ramps of the garage, which currently “seems very, very tight.”
In a statement after the meeting, Verzasca Managing Director Tim Lobanov said, “We are thrilled to get the support for our Edgewater project from this pivotal city board. The Edgewater neighborhood has experienced an incredible transformation into one of Miami’s most desirable urban areas to live in – particularly for renters. We are big long-term believers in the neighborhood.”
The project will offer studio, one-, two- and three-bedroom apartments.
The 2000 Biscayne project is the fourth in South Florida for Verzasca. The company is also developing condominium projects Aurora in Sunny Isles and Le Jardin Residences and Pearl House in Bay Harbor Islands.