Advertisement
The Newspaper for the Future of Miami
Connect with us:
Front Page » Opinion » End of the line for long-promised Metrorail expansions

End of the line for long-promised Metrorail expansions

The first three of 136 cars to replace the entire Metrorail fleet are being built just as county officials tell us that forever-promised lines that would make the Metrorail fully functional have become mythical rather than practical.

Metrorail, says Alice Bravo, the county’s transportation chief for one year, is just too expensive to add to. Besides, she says, even she has no idea what technology will be possible in just five years. Buses, she says, aren’t the answer. So the six transit corridors the county plans for our future will be some sort of light rail.

The 136 new cars to replace the original Metrorail trains are costing taxpayers nearly $376 million – nearing $3 million apiece. The first six were supposed to be running by last year and all by next year. But the trains – all 136 cars of them – are so late that we won’t get them until after we’ve kissed Metrorail growth goodbye. 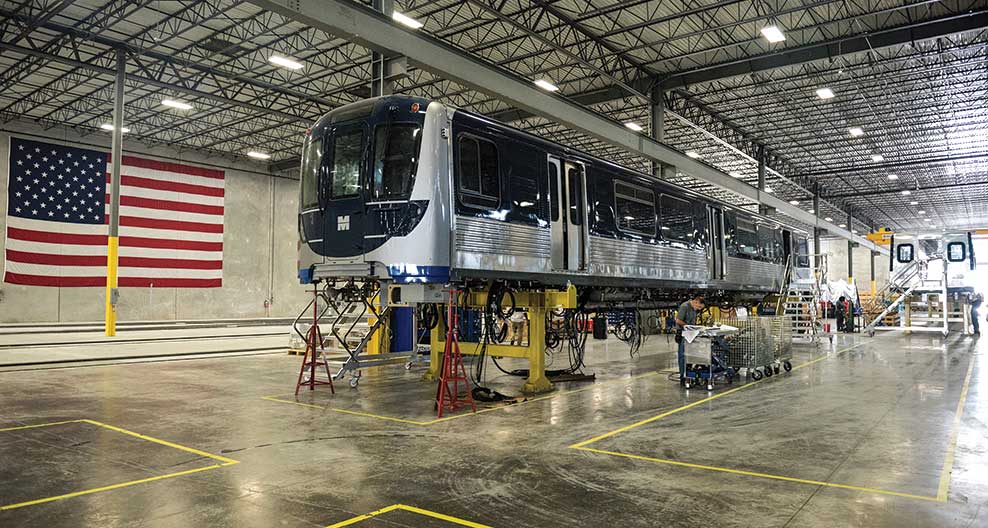 One of the 136 new Metrorail cars being assembled in Medley to replace all current trains.

Plans are to continue to run the current system with the new cars. Ms. Bravo is convinced that light rail, whenever it finally comes, can connect to Metrorail. Those new cars, she says, can also be converted, at some unmentioned cost, to run on light rail once they are finally ready to run on Metrorail.

Metrorail is a $1.5 billion urban railroad that never really got a chance to succeed as planned. The rail line that opened in 1984 was just the first leg -– as much as the county could fund at the time. And government never did find the money to do more than the recently added link in Miami International Airport.

All the other grand plans depended on federal funds, getting county commissioners to agree where to build next, and getting commissioners not to divert the transportation tax that was passed in 2002.

The stars and planets never did align for all of those elements. Miami Today’s files are crammed with hundreds of articles detailing twists and turns on the road to Metrorail success. In the end, we always strayed from the path.

One problem is that feeder buses and Metromover never brought the robust on-time service needed to build Metrorail traffic. As early as September 1984 we were reporting that a new British-made light rail car might feed Metrorail in South Dade on Florida East Coast Railway tracks to build ridership. It never happened.

By October 1985 attorney Martin Fine was writing in Miami Today that “Metrorail is unfinished business. There are some ruts in the road: some little foxes are spoiling the vine.” In other words, key feeders were missing – as most still are today, as evident in the six planned light rail corridors.

A 1994 article details lobbying in Washington for the “six Metrorail extensions.” In a close parallel to today, a consultant had told the county it needed to seek all six extensions at once, which is the plan for pushing forward six light rail lines as a package today. But that imploded when commissioners insisted that their own corridor had to come first. In the end, the squabbling county got left out of the federal funding.

The 2002 tax kitty to add the missing legs of Metrorail was oversold – there would never have been enough money to do the job we were promised – and then raided. The $376 million for replacement rail cars came out of money that was to add track miles, because the county had never reserved funds for replacements.

We tried everything to finish Metrorail. Now it’s finished.

Metrorail, however, was never what critics quickly branded it: Metrofail. The system this June carried 67,800 riders on an average weekday – presumably 33,900 people taking round trips. But the June ridership of just under 1.7 million was down 4.8% from the prior June. While county transit as a whole has lost riders every month of 2016, however, Metrorail has held its own.

There are no plans to shut down what Metrorail we already have. Indeed, the new trains, when we get them, are supposed to last 30 years. Whether all 30 years will be on the current elevated system is unknown.

The key imperatives for growth remain the same: find the money, either federal or local or through a for-profit partner; keep commissioners on board on the county’s plan; and don’t overpromise or raid the funds when budgets get tight.

Look forward in several years to trying out those $3 million Metrorail cars. A Metrorail ride is still the best $2.25 congestion avoidance in town.