Advertisement
The Newspaper for the Future of Miami
Connect with us:
Front Page » Transportation » Big-bus contract stalled 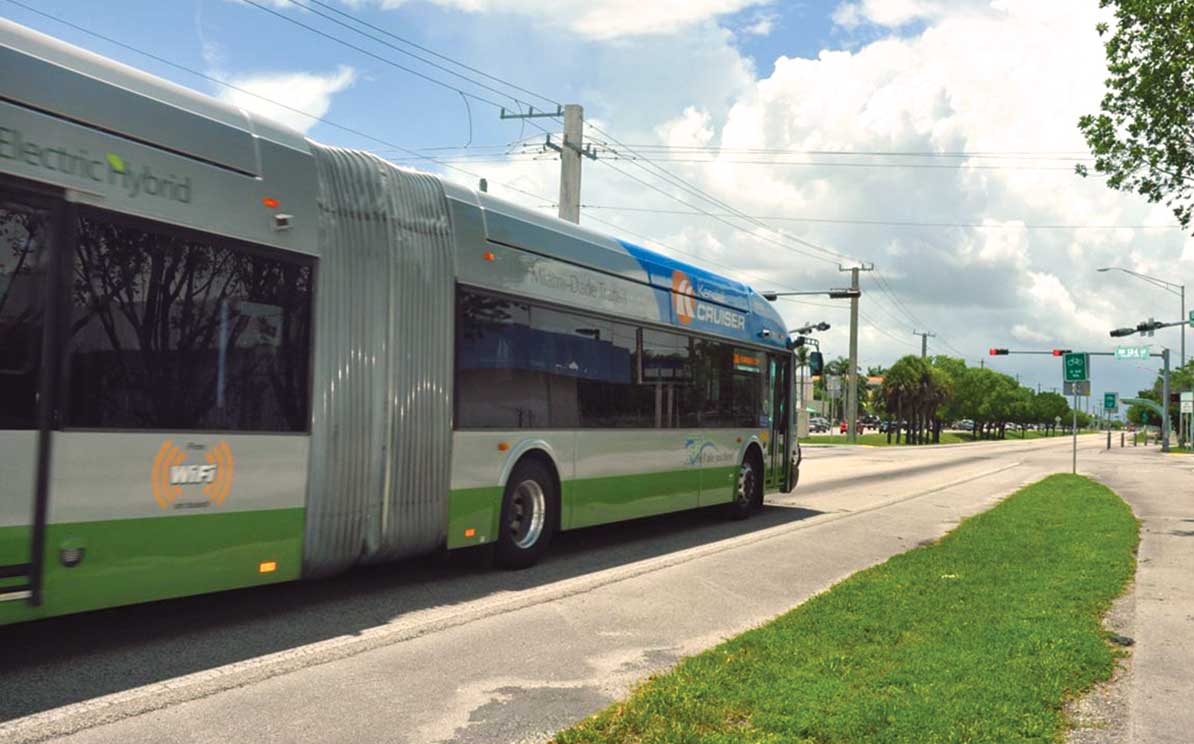 The Miami-Dade County Commission has stalled a contract to buy more than 60 buses to add to the county’s fleet.

Recently, elected officials and residents have pushed for more mass transit options to alleviate road congestion. While commissioners too have been onboard with that push, some on the dais raised concerns with the buses in line for purchase.

A contract pending approval would allow the county to buy 64 articulated buses, far larger than the standard transit buses seen on most county arteries. Specifically, articulated buses are the same type of bus as the Kendall Cruiser that runs on Southwest 88th Street and the I-95 Express buses connecting Miami-Dade and Broward counties.

Some commissioners said these buses are too big, add to traffic congestion, and travel empty during off-peak hours.

“These buses are scary,” said Xavier Suarez. “In my district, you would not want to have any of those big articulated buses.”

Supporters of the bus purchase had a different take. They said the buses in line for purchase are the result of a past commission vote that directed staff to do exactly what it’s doing – seek out a contract to buy larger buses.

“This dais… actually directed you and your predecessor to start looking at less vehicles for mass transit on heavy routes and this was the option – to get a bigger bus so you have one less bus instead of six [buses] following along on critical areas,” Sally Heyman told Miami-Dade Transit Director Ysela Llort at a recent public meeting.

In addition, the county commission, sitting as the majority of the Miami-Dade Metropolitan Planning Organization, recently voted to prioritize three thoroughfares for bus rapid transit: Kendall Drive; an east-west corridor, including the Dolphin Expressway; and Northwest 27th Avenue.

The 64 buses up for purchase are to service bus rapid transit specifically on Northwest 27th Avenue, one of the corridors the MPO prioritized, as well as on Biscayne Boulevard and the busway in South Miami-Dade.

Ms. Llort told the commission that the buses are needed because ridership in those corridors is so high that sometimes buses leave riders at the bus stop because they’re full. In addition, she added, bigger buses make more financial sense. Not only is their collective long-term cost less than buying smaller buses, but the county is in line to get state funding to buy the big buses.

The county commission in the past has approved an agreement between the county and the state department of transportation that provides for state funds to buy the buses, Deputy Mayor Alina Hudak told commissioners.

“Those buses that have already been funded through the [joint participation agreement] that we already have in place, it would really be a shame that we don’t have that capability,” Ms. Hudak told the commission. “Obviously, the decision to buy these types of buses is done by the professionals. Clearly, they believe that there’s a need for, and ridership figures indicate that there is a need for these particular corridors.”

The 64 buses would cost about $71.4 million over five years, according to a staff memo to the commission. State money would fund half the cost of 62 of the buses, with the other half funded by the county via a countywide half-percent sales surtax that funds the People’s Transportation Plan. A federal grant would purchase the other two buses.

Ms. Llort said operating and maintenance costs for these buses is about 30% less per seat than for the standard-size buses because the cost of labor is lower for the articulated buses.

“I don’t buy the math that Ysela [Llort] gave us because the math assumes that the seats are being used,” Commissioners Suarez responded. “If the buses cost less per seat, that doesn’t really mean anything if they’re empty.”

The commission deferred the bus purchase March 3. At its following meeting March 17, staff deferred the legislation seeking the contract authorization to no date certain.

Some commissioners said they understand their colleagues’ concerns about the bigger buses.

Then again, said Jose “Pepe” Diaz, “We can’t tell administration, ‘We’re going to go this route’ and at the last second switch it out again.”

One Response to Big-bus contract stalled