Advertisement
The Newspaper for the Future of Miami
Connect with us:
Front Page » Arts & Culture » Art Basel brings galleries from 36 nations to Miami Beach 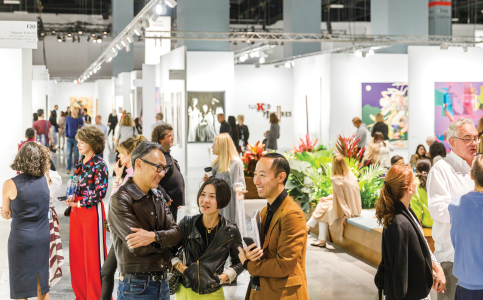 The 2021 edition of Art Basel Miami Beach is making its grand return and set to feature 253 leading galleries from around the globe.

Along with presenting works across all media, from rare and historical masterpieces to new pieces by today’s emerging artistic voices, the art fair, which is headquartered at the Miami Beach Convention Center at 1901 Convention Center Dr., will also present 16 large-scale artworks in Meridians, 25 curated exhibitions as part of the Kabinett sector and 10 panels as part of the Art Basel’s Conversations series.

From Dec. 2 to 4, the global art fair’s list of exhibitors includes galleries from 36 countries and territories spanning five continents, with more than half of the exhibitors having spaces in North and South America. The show welcomes 43 first-time exhibitors, including Harare with spaces in Harare and Victoria Falls, Rele Gallery with exhibition spaces in Lagos and Los Angeles, and Southard Reid from London.

The Meridians sector, which will newly be staged in a dedicated space on the convention center’s main show floor, will once again be curated by Mexico City-based Magalí Arriola, director of Museo Tamayo.

Art Basel’s Conversations series will highlight diverse issues from the rise of the NFT art market to questions of resilience post-pandemic and the need to reinvent the museum.

“There’s enormous excitement within the artworld on both sides of the Atlantic about Art Basel Miami Beach 2021,” said Marc Spiegler, the fair’s global director, “not only because it’s our first fair in two years in the Americas, but also because the show has never before featured such a diverse range of voices.”

In 2020, Art Basel had to cancel due to the severity of the pandemic and the uncertainty of staging large-scale events, international travel restrictions and bans, as well as quarantine regulations within the US and internationally.

The 2019 edition of Art Basel Miami Beach brought 269 galleries and attracted an attendance of 81,000 visiting the 600,000-square-foot convention center, which is transformed into an exhibition site.

Founded in 1970 by gallerists from Basel, Art Basel today stages premier art shows for modern and contemporary art in Basel, Miami Beach and Hong Kong. Art Basel’s engagement has expanded beyond art fairs through new digital platforms and a number of new initiatives such as the Art Basel and UBS Global Art Market Report and the BMW Art Journey.

Art Basel Miami Beach debuted in 2002 after being postponed due to 9/11 terrorist attacks. The show reflected Miami’s multi-cultural identity, presenting a diversity of work from the galleries and artists of the region. The fair has established itself as the premier show in the Americas. The first edition featured 160 galleries from 23 countries and attracts 30,000 visitors.

“Many of the works included question the traditional representations of class, race and power to resist social conventions,” Ms. Arriola said, “and to bridge the physical and cultural boundaries that surfaced in our society in recent times.”