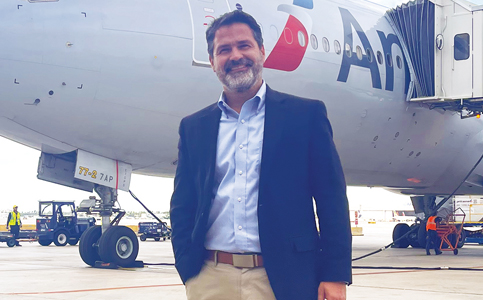 What started as a part-time job for Juan Carlos Liscano in 1994 ended up being his professional passion. Twenty-seven years later, he is vice president of Miami operations for American Airlines, one of the largest US international travel and cargo hubs and the gateway to Latin America and the Caribbean.

“I never once thought that I would be in aviation, and I realized I was really good at it, I enjoyed it, and it didn’t feel like a job,” Mr. Liscano said.

Looking back, he says “that’s not what I was expecting was going to happen, but it’s pretty amazing.”

Even though he has many responsibilities at his desk, Mr. Liscano makes time to be involved in the community. He is part of the Beacon Council board and treasurer of United Way, organizations he describes as “responsible for the economic development of Miami-Dade but also for taking care of those in need within our community.” He is also on the board of the US Hispanic Chamber of Commerce, based in Washington, DC.