Advertisement
The Newspaper for the Future of Miami
Connect with us:
Front Page » Profile » Bari Newport: Adding performances at cutting-edge venue GableStage 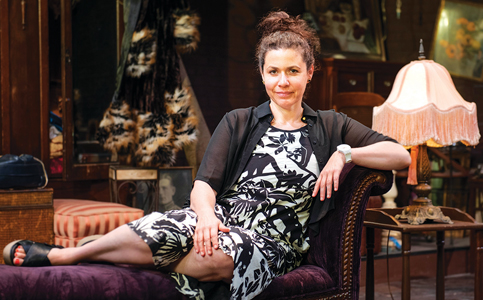 For as long as she can remember, Bari Newport, producing artistic director of GableStage since April, has been interested in serving a community. Since a very young age, she has been involved in theater as her family moved often.

“The idea of constantly looking for a community has been an important part of why my career has taken me on a journey back and forth across the country to communities big small and otherwise, and pretty early on I was really interested in communities that were outside of a major metropolitan area and what they did for professional theater,” she said.

Ms. Newport came to Miami after serving for nine seasons as artistic director at the Penobscot Theatre Company in Bangor, Maine. Before that, she was an artistic associate at the Alliance Theatre in Atlanta, artistic associate and literary manager at the Pasadena Playhouse, associate producer at Horizon Theatre, and associate director of Florida Repertory Theatre.

At age 12 she received pivotal advice from her mother: “If you really want to be an actress, you have to learn every aspect of theater, you have to be an expert,” Ms. Newport said. “And that’s good advice for anyone who’s interested in anything, especially when you’re wanting to pursue a career in it.”

So her mom would drop her two or three times a week at a small professional theater in Stamford, CT, and she would be in the office filing photographic headshots.

“I did that for years, and not only did it allow me as a young actor to look at resumes and wonder why did that person get cast and why not this other person, but it gave me the knowledge of how to handle casting,” Ms. Newport said. “I also was at the office, so I was able to learn so much and most importantly, I had access, and most of the time what people really need is access.” She reflects that since she was very young, she was able to learn everything about how to run a small professional theater company.

In college and later doing her master’s, Ms. Newport created initiatives with the aim of serving communities in which she was living. At the University of Southern California, she created a theater company to serve 4,000 to 5,000 kids who were bused to the university. She also created the Bill White Memorial Theater Library “because it really bothered me that that this school of theater, that’s one of the best in the country, didn’t have its own library.”

At the University of Iowa, where she pursued a master’s, she taught 13 classes to football players to help them find their own voice as they were constantly interviewed “and I became such a better actor by teaching them.”

For as long as she can remember, Ms. Newport has been taking the lead in initiatives that come with challenges. Now she is here to run one of the longest-running and highly acclaimed theater companies in South Florida, GableStage. She was interviewed by Miami Today reporter Gabriela Henriquez Stoikow.