Advertisement
The Newspaper for the Future of Miami
Connect with us:
Front Page » Transportation » Plan to alter 80 Miami-Dade bus routes at $20 million a year heads to vote 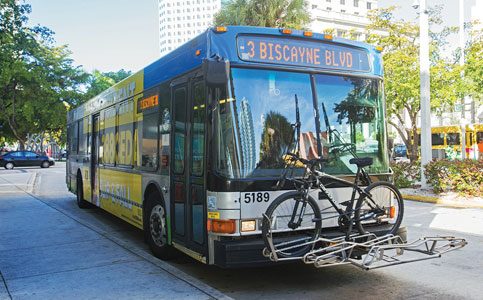 A county committee has ad­opted a resolution to widely adjust bus routes as part of the Better Bus Network created in 2018. The changes would affect 80 of the 99 routes and require about $20 million more operat­ing funds, according to county Chief Operations Officer Jimmy Morales.

At the Sept. 13 Transportation, Mobility and Planning Commit­tee meeting, 10 members of the public spoke mostly in favor of the resolution, while recogniz­ing it was not a perfect plan but an improvement to the existing routes. The approved plan now goes to the full county commis­sioner for final action.

Among speakers were Grace Perdomo, executive director of the Transit Alliance, which sparked the route review several years ago with its own plan, and Miami-Dade bus network user Danielle Rivera, who criticized lack of consideration for people with disabilities in the existing system.

Some changes include: upgrad­ing a 30-minute weekday peak service to every 15 minutes on a branch to Miami International Airport; a new route to provide higher frequency in peak hours between Southwest 82nd Avenue and downtown Miami; and a new route (number 14) that is a combination of existing routes C and M to provide direct 30-minute service from Mt. Sinai Hospital in Miami Beach via Collins Avenue to the Omni area of downtown Miami and extends to the Good­will via Overtown/Jackson every 60 minutes.

The plan would increase access to jobs and services by more than 30% within 60 minutes at midday on a weekday and direct more service in areas of high demand and less service in areas where it is barely used, a memo from Mr. Morales says. The changes were the result of the Transit Alliance’s 2018-2020 public outreach cam­paign that studied the use of the bus network.

Commissioner Sally Heyman noted critically that in previous county meetings it was proposed to hire taxis, Lyft, Uber, and South Florida Limousines to pick up passengers when there was a change in routes, but this alternative was not included in the resolution. She said the county had found it was cheaper to use these services than to have an empty bus covering a route multiple times before picking up someone.

“What I’m hoping, my col­leagues, we’ll see if there are ad­justments that need to be amended on this item,” Ms. Heyman said.

The resolution is part of a three-year effort among former county commissioners and the Department of Transportation and Public Works (DTPW), and is now brought forward by prime sponsor Eileen Higgins.

To improve the pace of bus service, the new network would reduce the number of stops, bringing the spacing between bus stops to an average distance of 1,300 feet, roughly five blocks or a quarter-mile. Currently, the distance between stops is about 850 feet, which makes the buses roll slowly.

“While staff acknowledges this will require a small percentage of existing passengers to walk a little further to their nearest bus stop, the initial 2019 survey showed 72% of respondents were willing to do so for a faster trip,” Mr. Morales wrote.

Commissioner Raquel Regala­do asked transit Director Eulois Cleckley to consider moving the stop for the bus across the Rick­enbacker Causeway closer to the MAST Academy, a public magnet school on Virginia Key, and do the same with other schools in her district, since kids have to cross the roadway to get the bus once they come in and out of school.

Commissioner Danielle Cohen Higgins expressed concern over the $20 million expenditure for the plan since, for instance, a new route (14) providing additional coverage to Overtown and a con­nection from mainland to Mt. Sinai Hospital has a cost of over $5 million, while other new routes such as 9A, providing more ser­vice along Northeast 163rd Street and retaining coverage with route 210 doesn’t have a cost detailed in the plan.

Mr. Cleckley explained that the $20 million represents an increase of 7% of the current budget but failed to detail why some routes are significantly more expensive than others. Nonetheless, he did say the transportation department would make marketing and com­munication efforts to reach out to users of the bus network without additional expenditures.

Commissioner Rebeca Sosa not only criticized that the bus networks would have fewer stops, making it difficult for people who cannot walk long distances, but also said she was concerned that the department would be using federal funds for the plan. “What happens next year when we don’t have those federal dollars?”

Mr. Cleckley explained that the department was considering including the plan between the first or second quarter of the next fiscal year, and he clarified that the bus system is currently charging different tiers of fares.

“If we try to use federal fund­ings today, you’re creating a hole tomorrow,” Ms. Sosa argued. She also requested results from the public outreach performed for the bus route changes, including the district provenance of those who participated.

“I will just say that I want to thank my colleagues for asking the questions they did,” Com­missioner Joe A. Martinez said. “I don’t think we got the answers we deserved, specifically about the costs.”

Mr. Martinez said that, once again, West Kendall would get reduced service and pointed out that unincorporated areas don’t have amenities such as the trolleys as an alternative to getting around. He asked for more information about the decisions made on major routes, and told sponsor Eileen Higgins he was not optimistic about the success of the resolution at the next commission meeting.

“It’s very exciting to talk about the Smart Plan, right? Because it’s new, and it’s big, and it’s transformational, but the heart and soul of our transit system is our bus network,” said Com­missioner Higgins. She said the proposal “is a unique opportunity to improve our transit system today,” and that the plan does not necessarily eliminate routes but redirects them.

For example, the much-dis­cussed $5 million route 14 would consolidate two of the county’s highest frequency routes, routes C and M. “So, it looks like a larger number, but you can say that those two other routes are coming through the 14, which is much more efficient,” she said. “It goes from more job centers and delivers you to more workplaces more quickly.”

After Commissioner Oliver G. Gilbert III made final comments supporting the item, commission­ers adopted the resolution with an amendment by Ms. Sosa to bring a status report to commissioners six months after the plan takes effect.

Also, before the resolution is brought to commissioners, Ms. Higgins directed DTPW officials to work with county attorneys on the proposals by Ms. Regalado on bus stops near high schools in District Seven, Ms. Heyman’s proposal to sub-contract taxi com­panies to cover unattended areas, and to give a look to routes such as 35 (Florida City to Cutler Bay) and to Transport Workers Union proposals.

The Better Bus Network of­ficially launched after a year of a public campaign in June 2019 by the transportation department as a plan to transform the bus network to provide high-quality and more frequent service to residents.