Advertisement
The Newspaper for the Future of Miami
Connect with us:
Front Page » Profile » Brendan McPherson: Takes Coast Guard helm for a region bordering 34 nations 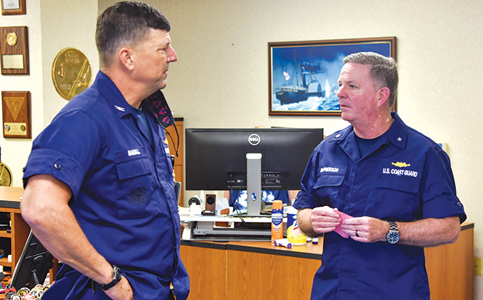 With over 30 years in the Coast Guard, including nearly 12 years cumulative sea time aboard six cutters, Rear Admiral Brendan McPherson is now beginning a new chapter as the Seventh District Commander.

The Seventh District Headquarters in Miami is responsible for all Coast Guard operations in the Southeast US and the Caribbean Basin, including Florida, Georgia, South Carolina, Puerto Rico and the US Virgin Islands. The area encompasses 1.8 million square miles and shares operational borders with 34 foreign nations and territories.

But this is not the first time for Rear Admiral McPherson in the area. His first assignment in the Coast Guard, in 1989, was in Miami. He has served in the area roughly 12 years in five assignments, including conducting counterdrug operations, migrant interdiction operations, and search and rescue missions.

His extensive career also includes serving as chief of staff of the Coast Guard Thirteenth District headquartered in Seattle; chief of the response division and chief of the Enforcement Branch for the Seventh District in Miami; press assistant to the commandant of the Coast Guard in Washington, DC; chief of strategic communications in the Headquarters Office of Governmental and Public Affairs; public affairs officer for the Atlantic Area/Fifth District in Portsmouth, VA; and an assignment to the Seventh District Tactical Law Enforcement Team in Miami.

Asked about the biggest lesson the Coast Guard has given him, he said “that there is no substitute for hard work and there are no barriers to success that can’t be overcome with dedication and devotion to duty.”

As Commander of the Seventh District, Rear Admiral McPherson’s focus is that the Coast Guard personnel are highly proficient in everything they do, that they are professional public servants and that they become the partner of choice for other agencies. The responsibilities are not little in the area, but as he said, it is a full-time job and he is “available seven days a week, 24 hours a day.”

He was interviewed by phone by Miami Today Reporter Gabriela Henriquez Stoikow.