Advertisement
The Newspaper for the Future of Miami
Connect with us:
Front Page » Top Stories » Transportation and Planning team digs into using tunnels countywide 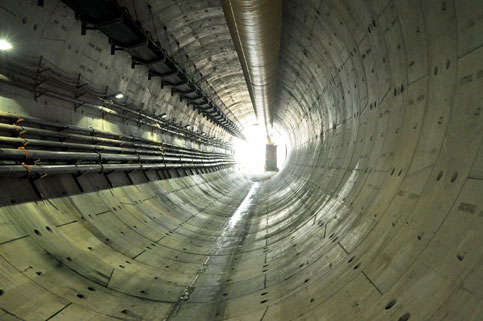 The Miami-Dade Transportation and Planning Organization (TPO) is on the road to preparing a report exploring tunneling technologies that could be used in projects throughout the county. The results, due within six months, are to include details such as the cost per mile and the operation and maintenance requirements of operating tunnels.

Members of the organization’s board adopted a resolution by City of Miami Mayor Francis Suarez authorizing the TPO executive director or its designee to prepare a comprehensive study “to evaluate advancements in tunneling technology that may provide accelerated project delivery and/or lower cost mobility options in Miami-Dade County,” the resolution reads.

“We are no strangers to tunnels here in Miami-Dade County,” she said. “We understand the challenges. However, we have an interest in learning about any new innovative emerging technologies in tunneling that may present a lower cost, an accelerated implementation, and if they are applicable here to any of our future projects.”

In 2017, the TPO published the Miami River Tunnel Feasibility Study prepared by Atkins that analyzed a tunnel connecting Brickell Avenue and Biscayne Boulevard under the Miami River in Downtown Miami. The study concluded that such a tunnel would have a significant impact “in terms of relief to surface street congestion in the vicinity of the Brickell Avenue Bridge,” especially when there are bridge openings for marine traffic.

“We want to go back to that 2017 study and see if any of this data that we collect now [something] may be applicable to that 2017 study,” Ms. Bouclé said. The transportation organization would also look at the short-range transportation plan (Transportation Improvement Plan) for the entire county to see if there’s any applicability in any other projects that the county may need or be looking at in the future, she said.

The results of this new study may also provide useful information and alternatives to advance the 2016 Strategic Miami Area Rapid Transit (Smart) Plan. “We are asking the consultant to not only scan their short-range transportation plan, but we’re having them look at the Smart Plan for doors, just to see if there may be any possible application,” Ms. Bouclé said.

But tunnels in Miami-Dade come with at least one challenge: waters in the area are not as far below surface level as in other areas. “We are unable to engineer a solution for that, but we are aware of our unique characteristics,” Ms. Bouclé said. For instance, the county has the PortMiami tunnel fully functioning.

TPO also reached out to the Federal Highway Administration to assist in the study. “They will be providing us with any other information on tunnel projects across the US or around the world,” Ms. Bouclé said. “They may have some innovative technology in the tunneling approach for our report as well.”

Miami Today has previously reported that Mr. Suarez discussed creating a two-mile transportation route below the Miami River with Tesla, SpaceX and The Boring Company CEO Elon Musk. The mayor said that Mr. Musk claimed he could deliver the project within six months for just $30 million.