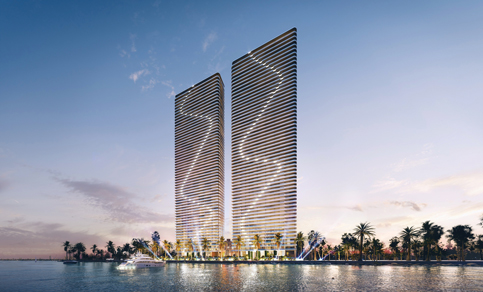 The Melo Group plans a pair of 60-story towers for Edgewater and the promise of a major portion of the growing public baywalk.

Aria Reserve is proposed for a more than three-acre site on Biscayne Bay at 700 NE 24th St.

The owner is listed as 24 Plaza Corp, an affiliate of the Melo family development company, owner-developers of many major mixed-use residential towers throughout Miami in recent years.

The overall project was recommended for approval by the city’s Urban Development Review Board on July 21, with conditions.

The company is touting robust sales of the condos, and has released details on when the first tower is expected to break ground.

The Arquitectonica-designed structures will be the tallest waterfront residential twin towers in the US, according to Melo.

The towers will be home to 782 residences, about 8,956 square feet of ground floor commercial-retail, and parking for up to 1,608 vehicles.

Iris Escarra, an attorney representing the developers, said: “This is a 3.86-acre site with a lot going on.”

Ms. Escarra said she would explain the reasons for requested waivers.

A letter from a neighboring property owner opposing the project was read into the record, saying the “monolithic” development would be a disaster to the neighborhood. It asked the board to deny the project.

The developer is requesting seven waivers of zoning requirements, including:

■Up to a 10% reduction for the side and rear setback requirements above the eighth story for the north tower from 30 feet to 27 feet.

■A 10% reduction in minimum building spacing requirement above the eighth story from 60 feet to 54 feet.

■A 10% increase in the maximum building floorplate length above the eighth story from 180 feet for the north and south towers.

■Along a secondary frontage, above-ground parking to extend into the second layer beyond 50% of the length of the frontage.

■Along a primary frontage, above-ground parking to extend into the second layer along the frontage.

Ms. Escarra said the developers are dedicating an easement, building sidewalks where none exist now, and will create a public Play Street at the end of 23rd Street, a type of pocket park, as part of Aria Reserve.

Public benefits will include 548 feet of public waterfront baywalk, she said.

Ms. Escarra said zoning requires up to 1,270 spaces but the developer plans 1,608. “That’s because another portion of the site may be developed in future,” she explained.

Mr. Bermello suggested dropping the parking to 1,270 spaces, which would solve several of the requested waivers.

The hardships seem “self-imposed,” Mr. Bermello said. “Why not provide the regular (required) parking without shortcuts?”

Ms. Escarra said the project began as a “by right” development but has since been “refined and refined and refined” to best fit the waterfront property, meet federal rules for potential flooding and sea level rise, and to maintain view corridors.

Mr. Bermello continued to say the developer could construct this dual tower project without the need of so many waivers.

“You’ve got plenty of land. Plenty of area. There’s no reason you can’t do it,” he said.

“It seems like all these waivers are self-imposed. You can do a wonderful design without creating these issues. I don’t get it,” said Mr. Bermello.

“It’s been about three years working on this … and working with the city’s Department of Public Works and the city commission (to vacate streets),” said Bernardo Fort-Brescia, project architect.

The owner-developer inherited three dead-end streets that didn’t have a turnaround, and there was no way for fire trucks or garbage trucks to maneuver, he explained.

“Part of the discussion was with Public Works about how to free up the end of the road and make it viable for vehicles to (go through),” Mr. Fort-Brescia said.

Pointing out the redistribution of the property and the traffic lanes, he said, “This new passage determined the placement of this building.”

The redesign “created a very narrow site within which we had to fit the buildings,” he added.

In a press release, the developer said construction of the first 391-unit tower is slated to start in early 2022 and be completed by 2024.

Residences are to include units with one- to four-bedroom floorplans measuring 1,100 to 2,600 square feet.

A limited collection of 15 penthouses will also be available, ranging from 3,500 to over 9,000 square feet, each with its own one-of-a-kind personal three-car garage vault, the press release said.

“This type of waterfront, luxury condominium opportunity simply no longer exists in Miami at this price point,” Martin Melo, co-principal of the Melo Group, said in the release.

The building will also feature a double-level 25-foot lobby, a waterfront restaurant and café, two additional pool and lounge areas with two Jacuzzis and poolside daybeds, a fire pit, a dog park, and a telescope observatory area looking out over the bay.