Advertisement
The Newspaper for the Future of Miami
Connect with us:
Front Page » Communities » Miami’s waterfront parks reimagined 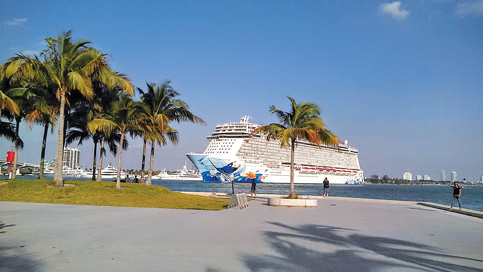 Two of the City of Miami’s newest and most popular parks would have been unrecognizable even 20 years ago.

As the City of Miami celebrates its 125th Anniversary, proponents of access to publicly-owned lands are applauding the reimagining of these two great city parks for the benefit of the community.

The park features the longest waterfront baywalk in Miami, with a promenade from Biscayne Boulevard to Biscayne Bay providing pedestrian access to a collection of museums.

Many years ago, an effort to redesign Bicentennial Park led to creation of a waterfront renewal committee and a May 2001 report on the site.

Bicentennial Park was created at the site of the old Port of Miami out of fill land and dedicated on the 200th anniversary of the American Revolution, the report said. It was funded by money from the Parks for People Bond Issue of 1972.

“Soon after it opened, there were several violent incidents in the park, then in subsequent years it became a haven for the homeless, with the Miami Grand Prix race track further denigrating it as a fit place for public use,” the report said.

For years the park property was closed and fenced off, serving as a barrier to public access to the bay.

With the construction of the Pérez Art Museum Miami and the Patricia and Phillip Frost Museum of Science, the city devoted new money into improvements and landscaping and renamed the park Museum Park.

In early 2019 the park was officially named Maurice A. Ferré Park in dedication to former Miami Mayor Maurice Ferré to pay tribute to him and his legacy.

This waterfront area is also home to the Plaza of the Spanish Navy/Plaza de la Marina Española.

The plaza features a monument that honors the Spanish Navy that arrived in the Americas on Oct. 12, 1492. The monument was erected in 1991 near the mooring site of the Spanish tall ship Juan Sebastian Elcano by Mayor Xavier Suarez and Consul General Erik I. Martel.

The park is also near other landmarks including the FTX Arena (formerly AmericanAirlines Arena), Bayside Marketplace, the Pérez Art Museum Miami and the Patricia and Phillip Frost Museum of Science.

The city’s newest park, Regatta Park, has transformed the Coconut Grove waterfront at 3500 Pan American Drive, next door to the historic Miami City Hall and fronted on the bay by Dinner Key Marina.

For decades the prime waterfront real estate was taken up by the cavernous Coconut Grove Exhibition Center, a grandiose collection of buildings that served more as a barrier to public access to Biscayne Bay.

The original building opened in 1917 as a hangar of the Dinner Key Naval Air Facility. The base was decommissioned in 1945 and sold to the city a year later. The main hangar was converted in 1950 into a non-air conditioned exhibition hall that doubled as an arena.

This was the site of the March 1969 incident in which Jim Morrison of The Doors was arrested for allegedly exposing himself to the audience.

The Miami Floridians of the American Basketball Association played some of their home games at the auditorium in the 1969-70 season.

The final days of the old expo center saw the structure serve as a make-shift television film lot. “Burn Notice,” a USA Network drama series, used the convention center for production of the show. In 2012, city leaders expressed an interest in demolishing the center to build a bayfront park.

For the seventh and final season in 2013, USA Network reportedly agreed to use the center with an increase of its rent from $240,000 to $450,000 a year, enough to cover the city’s demolition costs, plus taxes. The Coconut Grove Convention Center was torn down in November 2013.

The park is hugged on the east by a new municipal parking lot.

The city has also joined with the Miami Parking Authority and a private developer in a public-private partnership to redevelop the rest of the city’s waterfront into Regatta Harbour, a mixed-use project that will include a new marina, retail stores, restaurants and cafes, and a new municipal parking garage that opened in September 2020.

The park hosts many events annually including the Sailing World Cup and the Coconut Grove Arts Festival that attracts an estimated 120,000 people.

“Preserving urban green spaces is vital to the environmental health of both residents of the City of Miami and to the City itself,” said Christine Rupp, executive director of Dade Heritage Trust, in an email to Miami Today.

“The public waterfront spaces at Ferré Park and Regatta Park with their park amenities, open vistas to the Bay and tree canopy are vital to enhancing the quality of life for Miami’s increasing population.

“I remember when I moved to Miami, Bicentennial Park was essentially closed off. I, like many people, snuck through the fence to explore the abandoned, awkward space with man-made hills, walls, and an obstructed view of the Bay from the Boulevard.

“It was difficult to understand how such a valuable piece of real estate with so much potential to serve the public had been left to deteriorate,” she wrote.

Ms. Rupp concluded, “Thankfully, as Miami has evolved, so has the reimagining of these two great City parks for the benefit of the community.”