Advertisement
The Newspaper for the Future of Miami
Connect with us:
Front Page » Profile » Eric Knowles: Leads much-enlarged Miami-Dade Chamber of Commerce 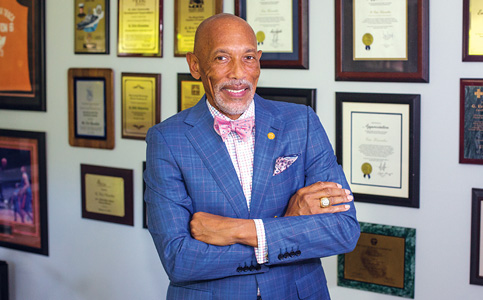 May marked seven years for Eric Knowles as president and CEO of the Miami-Dade Chamber of Commerce, an organization charged with linking and advancing the interests of Black-, minority- and women-owned businesses here.

Since taking over, he’s raised the chamber’s annual budget more than threefold to $1 million and grew its staff, all while bolstering its membership and adding to its ranks.

When Covid-19 hit last year, he intensified the chamber’s work to help members and non-members alike survive with new programming and by connecting them to financial and physical aid.

“We kept our doors open and were able to help many businesses keep theirs open as well,” he said. “And we kept working to build relationships in Miami, getting our large corporations to understand when we talk about equity inclusion, pushing that envelope.”

Last year, he and the leaders of chambers in Broward and Palm Beach counties, among other groups, launched the South Florida Black Prosperity Alliance.

He was also part of the Miami-Dade Covid-19 Economic Recovery Task Force, a think tank of local leaders who met several times weekly to develop strategies the county could use to rebound from the pandemic’s effects.

With less than a 2% share of public contracts in Miami-Dade going to Black businesses, he said, much work is left to be done to make sure that as the county bounces back from the pandemic, it propels forward the historically overlooked small businesses that comprise a vital part of its proverbial backbone.

“It’s an ongoing task,” he said, “to get the rest of Miami-Dade County – whether it’s the school board, the county itself or the large corporations – to understand that if we are to become truly a world-class city, everyone must benefit and grow along with the boom that’s happening here.”

Mr. Knowles spoke by phone in May with Miami Today reporter Jesse Scheckner.