Advertisement
The Newspaper for the Future of Miami
Connect with us:
Front Page » Business & Finance » At innovation lunch, Manny Medina points the way 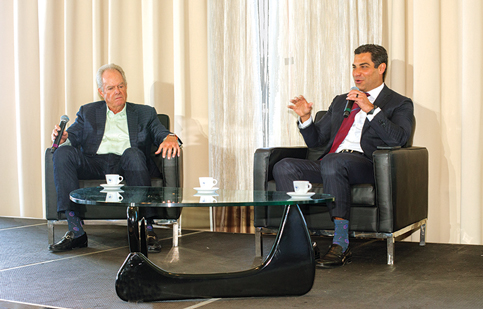 A Miami Innovation Luncheon celebrating the City of Miami’s 125th birthday included a panel of industry leaders in turning Miami into the “capital of capital” with an ecosystem of technology that develops Miami’s future.

Manny Medina, founder of Medina Capital and eMerge Americas; Jaret Davis, co-managing shareholder of the Greenberg Traurig law firm; and Mayor Francis Suarez were featured at Monday’s invitation-only luncheon at the Rusty Pelican on Virginia Key. The audience was sprinkled with new technology leaders who have been flowing into Miami. Some of them got shout-outs from the session’s leaders, including the mayor.

“We want to change our narrative, to retell our story of a place where you just go to retire or have fun to telling the success stories of new businesses and financial corporations that moved down to Miami,” Mayor Francis Suarez said. “We’re the David and Silicon Valley is Goliath.”

Second quarter statistics show that Miami had the most increase in technology jobs in the nation and that the most migration work in software is in Miami, according to Mayor Suarez. “Flymo. It is a combination of the flywheel effect and the fear of missing out. That’s what is going to keep the people coming down here to stay here and create an ecosystem that isn’t complacent.”

The flywheel effect is a term defined by Jim Collins in his economics book “Good to Great.” It compares business beginnings to a heavy metal wheel; it takes a lot of effort to get it spinning, but once it is moving, the wheel is spinning quickly and continually. “From the outside, the transitions look dramatic, almost like revolutionary breakthroughs. But from the inside, they feel completely different, more like an organic development process,” Mr. Collins wrote.

Manny Medina’s global Miami-based technology event, eMerge, was described as this wheel. “Once the spark was lit, a phenomenon happened! You realized that something bigger needed to happen in the city and that it couldn’t just be focused on one company. How did you feel being Miami’s first IPO?” Mayor Suarez asked Mr. Medina.

Mr. Medina created eMerge, a premier technology event that connects Latin America, Europe and America together academically, in enterprise and in government together. “The idea came as I was having an ice-cold beer in the Florida Keys,” Mr. Medina said. “I said, ‘This is what we have to do.’ This has to begin at a national level, so we began by looking at maps of the Americas,” Mr. Medina said. “You’ve got to bring academia, enterprise and government together.”

The 2021 event had to be canceled due to the pandemic but eMerge is planned in Miami Beach for April 18-19, 2022. It includes teaching young entrepreneurs about cybersecurity, fintech, health tech and wit – making friends who share similar interests to yours.

“I’m so grateful that playing a role in this is great payback,” Mr. Medina said. “We had operations all over the world. People are coming now. I don’t care if they don’t know if I’m here or not.”

The “flymo” thesis that Mayor Suarez created recently led him to becoming a member of the eMerge board and believing that the city’s support is necessary. “We live in the most disruptive times. What that means for cities, families and countries is you always have to try to be one step ahead,” Mayor Suarez said. “And you can never get comfortable. You can’t relax on those impressive stats. Keep our volume up and keep our programs going. Support eMerge because it’s helping develop the future.”