Advertisement
The Newspaper for the Future of Miami
Connect with us:
Front Page » Communities » Voters to rule on Virginia Key marina lease without bids

Voters to rule on Virginia Key marina lease without bids 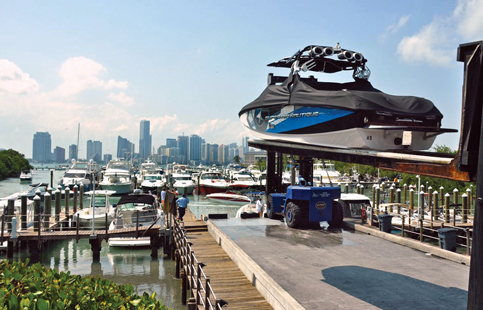 Miami City Commissioners have asked the legal department to prepare wording for a ballot question that would ask voters if the long-time tenant for Virginia Key should have its lease extended.

The 3-2 vote, with Manolo Reyes and Alex Diaz de la Portilla opposed, came after a long and sometimes contentious discussion on the steps taken so far for the marina’s future. Vice Chairman Ken Russell, who proposed the legislation, said current tenant Biscayne Marine Partners LLC has been a good steward of the 27 acres of city-owned property in Virginia Key.

Should voters agree to extend the lease, the commission would waive competitive bidding and authorize City Manager Art Noriega to negotiate and execute a ground lease and development agreement for a mixed-use waterfront facility with Biscayne Marine Partners for an initial 45 years with two 15-year renewals; an annual base rent equal to the greater of a fair market value determined by two independent state certified appraisers or $2.5 million; plus a percentage rent equal to 6% of the gross revenues generated from wet slip and dry storage, 6% of gross revenues generated from fuel sales; and 4% of gross revenues generated from sublease income and other income-generating sources received from the project; plus any rent increases or any additional rents negotiated by the parties.

Mr. Reyes said he wants the city to request proposals to find the best deal for Miami. Without competition, he said, the city will never know if the development by Biscayne Marine Partners will be the best one possible. Professional marina managers and experts, he said, should evaluate any responses that come in.

The commission has sent out two requests for proposals (RFPs), Mr. Russell said, and both times the responses were rejected, which is why he is willing to bring the issue to the voters.

Earlier in the morning July 8, just before commissioners commenced the meeting, the city received an unsolicited proposal from Suntex Marina Investors to develop a mixed-use facility and proposing a minimum investment of $100 million and $2.75 million base rent.

Several commissioners said they have recently been approached by Suntex Marina Investors with a pitch, but it was for Dinner Key Marina.

Mr. Diaz de la Portilla said he doesn’t want to “hoodwink” voters by telling them they have a choice but only giving them one option. “Why not issue an RFP and give them competition?” he asked. “Suntex has a proven history of building world-class marinas. Issue an RFP, let them compete, and may the best man win.”

The precise wording of the question is to come back to the commission for final approval July 22.

The battle over the lease has gone on for years, with some commissioners seeking to oust Biscayne Marine Partners.

During a July 2019 commission meeting, Mr. Russell pointed to three options for the property: self-management of the marinas by the city, third-party management by an outside operator, or in effect recognizing the highest bidder at that time, a consortium that included Suntex.

Mr. Reyes at that time suggested that the marinas be managed in-house.

At the time Biscayne Marine Partners LLC was the second-place bidder and had filed a bid protest after the city administration declared the consortium the highest bidder. Biscayne Marine also sued the city in district and appellate courts, though the courts had sided with the city.

During the 2019 meeting, multiple persons noted the more than two years and multiple deferrals over the fate of the city-owned property.

“I’d be remiss if I did not state on the record on behalf of the administration that I believe – and Commissioner [Keon] Hardemon said it best – this has gone long enough: 17 deferrals, three or four court dates, two RFPs,” then-City Manager Emilio González said. “We’re looking silly here, and I hate using that word. I want to be professional. I will stand by whatever decision you gentlemen make, and I would salute the flag smartly and carry it out. But I feel compelled to tell you that we equally strongly believe that we should move forward with this.” The matter was again deferred that day.