Advertisement
The Newspaper for the Future of Miami
Connect with us:
Front Page » Government » Stormy city commission can’t blow Rickenbacker Marina off course 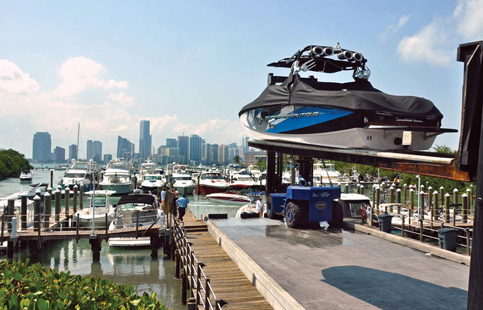 The fate of the city-owned marinas on Virginia Key led to a long and loud shouting match between two Miami city commissioners.

Once decorum was restored at the July 22 meeting, the end result was a split vote that advanced a ballot proposal designed to keep the current operators of Rickenbacker Marina – Biscayne Marine Partners LLC – in control of that property for another 75 years.

The verbal tussle dragged on and led to personal digs delivered by each commissioner alleging conflicts of interest on both sides, and some gavel-pounding and scolding by Chair Ken Russell.

The hostility began soon after a move was made to defer two proposed resolutions brought by Mr. Diaz de la Portilla.

His proposals stemmed from an unsolicited proposal July 8 from Suntex Marina Investors to develop a mixed-use facility on the Virginia Key site, and proposing a minimum investment of $100 million and $2.75 million base rent.

Mr. Diaz de la Portilla’s move to give Suntex a chance at a long-term lease of the marinas failed. He made a motion to ask voters to approve the deal offered by Suntex, but the motion died for lack of a second.

He then made a motion to defer his proposed legislation putting Suntex on the November ballot but it also died for lack of a second.

The two proposals sponsored by Mr. Diaz de la Portilla were later withdrawn by a voice vote of the commission, but not before the hollering match with Mr. Carollo.

Mr. Diaz de la Portilla said a commission vote July 8 would give the marinas to a single vendor. “We need debate,” he said.

“I think there’s another vendor that is offering a better deal … more money for the city. Let the citizens decide in November,” said Mr. Diaz de la Portilla.

Mr. Carollo said he disagreed “with just about every statement” made by Mr. Diaz de la Portilla.

“I haven’t heard you say anything new … everything you’re saying is a repeat. All we see are these tricks from Suntex,” Mr. Carollo said, as Mr. Diaz de la Portilla tried to talk over him.

Mr. Carollo then stated, “I could go into other things that are unpleasant but I’m trying to avoid that.”

Mr. Carollo equated the latest unsolicited proposal from Suntex to “a trick rabbit in a hat.”

Chairman Russell said he agreed the Suntex proposal was “a Hail Mary” to force the commissioners to select an operator at the July 22 meeting or force a request for proposals.

“It’s not quite as simple as that,” responded Mr. Carollo.

Mr. Diaz de la Portilla said Miami deserves a world-class marina and it hasn’t gotten that in the more than seven years the city and the current operators of Rickenbacker Marina have fought, legislatively and in court.

“To be clear, in the last seven years that (the current operators have controlled the marina) nothing’s happened there! There’s no trick here! We have an unsolicited proposal come before us. We have a better deal for generating more money. Choice … the option is what we want,” said an agitated Mr. Diaz de la Portilla.

Commissioners later approved the final wording of a single ballot question regarding the current marina operators, after City Attorney Victoria Méndez amended the language to include an increase in rent to be paid and other factors.

If city voters approve the no-bid long-term lease extension to the current marina operators, it should mean a city negotiated agreement securing more money annually in rent payments, and at least 10% of the revenue devoted to support an African-American museum at Historic Virginia Key Beach Park.

The museum would be built with grant money from Miami-Dade County.

The referendum will ask city voters: “Shall Miami’s Charter be amended authorizing the City to waive competitive bidding, negotiate, and execute a 75-year waterfront lease of approximately 27 acres at 3301 Rickenbacker Causeway with Biscayne Marine Partners LLC,” for a minimum investment of $115 million, annual rent of $2.75 million with 10% dedicated to the Virginia Key Beach Park Trust, percentage rent of 6% gross boat storage and gross fuel revenues, and 4% gross revenues from all other sources, and more.

The final ballot language was approved 4 to 1, with Mr. Diaz de la Portilla voting no.

The original proposed ballot language didn’t mention an initial investment in redevelopment of the property, and set the rent at “Greater of $2,500,000 annual rent or fair market value.”

The initial investment amount and increases in annual rent payments were orally agreed to on the record by an attorney representing current marina operators Biscayne Marine Partners LLC.

The ballot item will go before city voters at a special election Nov. 2.

If voters agree to extend the lease, the commission would waive competitive bidding and authorize City Manager Art Noriega to negotiate and execute a ground lease and development agreement for a mixed-use waterfront facility with Biscayne Marine Partners.