Advertisement
The Newspaper for the Future of Miami
Connect with us:
Front Page » Transportation » US kicks in more for 75 Miami-Dade electric buses

US kicks in more for 75 Miami-Dade electric buses 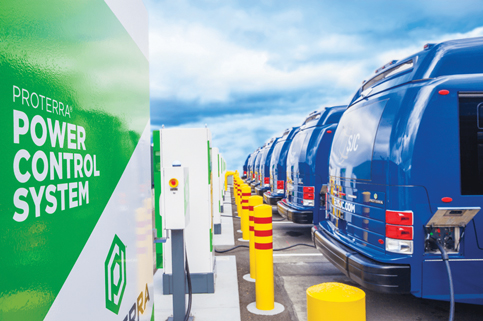 Improving service reliability and air quality for the community, the grant, which is being funded by the Low- or No-Emission (Low-No) Grant program, will support Miami-Dade’s Proterra bus replacement program. Funding was announced last week.

“This grant will basically help us pay for our 75 battery-electric buses we had already ordered,” said Robert Villar, Miami-Dade County Department of Transportation and Public Works director of finance and budgeting.

The buses will be equally distributed throughout county routes, especially underserved communities, Mr. Villar said. Later in the year, a pilot bus will be deployed and run as a test drive, he said.

“We want to make sure that there are no issues while it’s en route and then we’ll go ahead and complete the delivery of 74 additional buses, which we expect to have in 2022,” he said.

Including charging infrastructure installations, the Proterra procurement will cost $72.1 million, to be leased and financed by Miami-Dade County and repaid with Federal Transit Administration funds and receipts from the so-called half-penny surtax on sales in Miami-Dade that funds transportation.

In October 2019, commissioners OK’d an arrangement with electric bus manufacturer Proterra in which the county could buy up to 75 40-foot electric buses and charging stations.

At the time, commissioners approved an initial 33-bus order at a cost of $29.6 million, including $4 million for three charging stations. They gave a preliminary OK to spending another $37.5 million for a future purchase of 42 more.

“We have done our research and it did take us a long time to get our procurement done, which has really benefited us because the technology has advanced,” Mr. Villar said. “The Biden administration is going to do a significant push to electrify and reduce the carbon emissions. So, we’re looking forward to more of these opportunities and we’ll keep taking advantage of them.”