Advertisement
The Newspaper for the Future of Miami
Connect with us:
Front Page » Opinion » Youth baseball academies are rising, so where is ours?

Youth baseball academies are rising, so where is ours?

Unfortunately, the Marlins’ promise was to join Major League Baseball and build a youth complex in Miami for the benefit of future minority big league players who live here, with the major leagues pledging $3.3 million for the project. But the complex started last week is far off in the Dominican Republic for the benefit of foreign ballplayers.

Miami is still waiting for its urban youth complex – a statement that has been a regular headline in Miami Today since 2012.

The pledge to Miami was made when former Marlins owners were asking us to build them a ballpark where they would get all the benefits of ownership without paying for it. The agreement that Miami-Dade County commissioners eventually approved included a youth baseball academy.

The youth academy was to open simultaneously with the Marlins stadium. That stadium opened in 2012. In September the Marlins will finish a decade there.

So, where is Miami’s $3 million youth academy, as promised? It’s not even on drawing boards. And nobody is asking for the biggest payback we will ever get from a baseball stadium that, with interest, is costing taxpayers $3 billion – that’s right, one tenth of one percent payback and nobody is even asking for it. Outrageous.

When the current Marlins owners took over in 2017 I asked President Derek Jeter about the academy. He said he was well aware of the promise in the stadium deal by his predecessors and the team was working on it. He never mentioned the Dominican Republic as a target site. 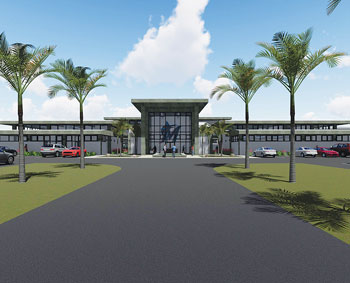 The Miami Marlins last week announced this new youth baseball academy will rise in the Dominican Republic for international players.

Of course, the two academies aren’t identical. The Dominican Republic site is for youths who are all under control of the Marlins as potential players somewhere. The plan for a Miami site was to develop potential players for all of Major League Baseball, in the process educating and guiding many local youths who will never make it to the major leagues.

Take the New York Mets’ Dominic Smith, who in 2017 hit his first home run against the Marlins. He started at age 10 to attend Major League Baseball’s Urban Youth Academy in Compton, CA, a facility that opened in 2006 to help inner-city kids learn about both baseball and life, giving them impetus to advance. When he joined the Mets at age 22 he was the ninth graduate of that academy to reach the Major Leagues. Today his annual baseball salary is $2.55 million – thank you, Compton Academy.

While most of the 2,500-plus kids aged 8 to 17 who train each year in that California academy will never play pro baseball, all have safe, organized after-school recreation while their urban community reaps the benefits of their training for adult life. They are learning to bat, not to battle.

The early success of that California hub was in the minds of Major League executives and Miami-Dade leaders in 2008 when the Marlins were beseeching us to build a stadium at public cost. Taxpayers were to get one gift: the second Urban Youth Academy was to open here, run by the league at its expense. It’s in the stadium contract – but with no specifics.

We are still waiting for Miami’s Urban Youth Academy. But Major League Baseball hadn’t forgotten academies. While Miami waited, academies opened in Houston in 2010, New Orleans in 2012, then Cincinnati and Washington, Philadelphia and Kansas City.

Baseball didn’t forget Miami – exactly. Miami Today asked league officials for years and kept being assured that an academy was coming soon. They told us our academy might be funded for more than the league had promised, and be bigger.

“I don’t want to limit it,” Jimmie Lee Solomon, Major League Baseball’s executive vice president of baseball operations, told us in 2009. “We may be looking to expand things.”

“We have had an architect already design the facility so the process is moving along,” league spokesman Steven Arocho told us in 2011.

“We’re all over this like a cheap suit,” league executive Darrell Miller told us in 2014.

Over the years we were told all an academy needs is a site, permits, a plan, operators and money. Then it’s set to go. That means they not only haven’t gotten to first base but they haven’t even arrived at the field.

Other than Mr. Jeter’s acknowledgement that the team is aware, we never heard a peep from the Marlins themselves about the academy once they had a stadium contract in hand. They just left it to the league, which is based in New York, to do the job. And nobody has done anything.

Now the Marlins prepare to finish their tenth season in a stadium that you and I are paying for each year and for which our children will pay far more: a balloon county bond issue will require far more than $100 million in payments each year, year after year. We are stuck with that.

Elected officials could ease the pain by applying a little pressure on the team that controls the taxpayers’ stadium as a virtual gift by seeking the only real payback we can hope for: the promised academy for this community’s minority youth, funded by the Marlins and the league. Kids safely training in an academy are not involved in the kinds of gang gun violence that the mayor and commissioners are battling today.

One of those kids may be the next Dominic Smith. And all will get valuable training for life.

The Dominican Republic is fortunate to get a youth training site. Our question is: we have a deal, so where’s ours? The mayor and commissioners should join in asking the Marlins that question, right now.

One Response to Youth baseball academies are rising, so where is ours?