Advertisement
The Newspaper for the Future of Miami
Connect with us:
Front Page » Communities » Wynwood mixed-use project deferred amid concerns

Written by John Charles Robbins on May 4, 2021
Advertisement 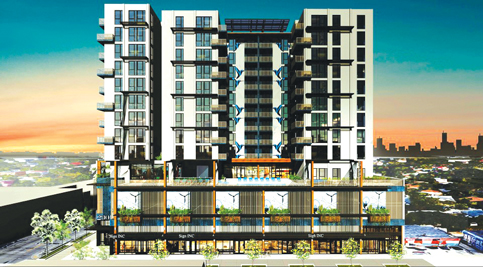 A plan to build a 12-story mixed-use structure containing commercial space and affordable/workforce housing met with a chilly reception before the Wynwood Design Review Committee.

The developer, through representatives, chose to voluntarily defer the project in order to address concerns and suggestions from committee members.

Members expressed concern with the scale and mass of the proposed building and how the façade was being used.

The owner-developer, New Urban Development LLC, plans to construct View 29 at 2901 NW Second Ave. The project promises 116 workforce housing units, 105 parking spaces, and amenities that will include a swimming pool, community room and play room accessible to all building residents.

The entire project has floor area totaling 199,864 square feet, including about 6,910 square feet of commercial-retail. Open space provided would be 5,609 square feet.

The zoning allows up to eight stories but the developer is requesting four additional stories in exchange for public benefits to be provided.

Attorney Brian Dombrowski, representing the developer, wrote to the city about View 29: “The Project is proposed as an urban center project providing for a variety of uses. The Project accomplishes being a traffic node with nearby bus stops and is located within an area designated a Transit Corridor by the City. The Project has access to multiple bus routes within walking distance. City of Miami trolley stops in the area add to the transit options available to the Property.”

He added: “The Project proposes a mixed use building with ground floor retail and Affordable/Workforce Housing components above. This will activate the pedestrian realm while providing additional affordable residential options in the neighborhood.”

Mr. Dombrowski said the property is to be developed pursuant to the Miami 21 (zoning code) Attainable Mixed Income Housing Program.

On Sept. 28, 2020, the city’s Department of Housing and Community Development reviewed and approved the project.

The approved Affordable Housing Certification includes a breakdown of the unit types serving each income level.

Mr. Dombrowski told the committee the workforce housing units will range from 650 to 1,200 square feet.

The building is to include three levels of parking, and ground floor retail along Northwest 29th Street.

Jennifer McConney-Gayoso, principal at Studio Mc+G Architecture, which designed the project, told the committee the developer’s team sees the importance of designing a project for the northern gateway to the evolving Wynwood Arts District.

“We wanted to look at Wynwood over the last 100 years, and to tell a story about the neighborhood – the former garment district,” she said.

Ms. McConney-Gayoso said: “We wanted to tell the story about the fabric of the neighborhood with fabric. With denim. The working-class base and pedestal (of the building) will be made up of threads … stainless steel threads that weave and create an art treatment, screening the garage.”

In sections, white stucco will serve as canvases for painted artwork as part of the building.

She said the lower levels will be clad in aluminum that looks like copper stitching on jeans.

“We call those the threads. They start at the top of the first floor and go to the amenity level,” she said. They will be spaced about 12 inches apart on a stucco finish with a blue dye.

Committee member Erik Rutter commended the developer’s team for a “great presentation” but said he is concerned there is not enough outdoor green space.

Committee member Amanda Hertzler said: “My reluctance is with the massiveness of the façade … you’re doing 30-some feet of parking with no liners. The scale of Wynwood has not seen that. The scale is unfortunate. I would have preferred to see liner units or something.”

Ms. Hertzler also said she sees repetition in the design and no demarcation of scale. “I see the same element over and over again. I’d like to see some variation,” she said.

Chairman Victor Sanchez agreed with members concerned about the massing of the 12 stories. “When it comes to telling the story of Wynwood, it sounds great when I hear it but I’m not seeing it,” he said.

Attorney Iris Escarra, also representing the owner-developer, said they appreciate the review and comments of the committee and “we are happy to defer this item. We respectfully ask to defer to the next meeting … we took diligent notes (of the concerns and suggestions).”

One Response to Wynwood mixed-use project deferred amid concerns