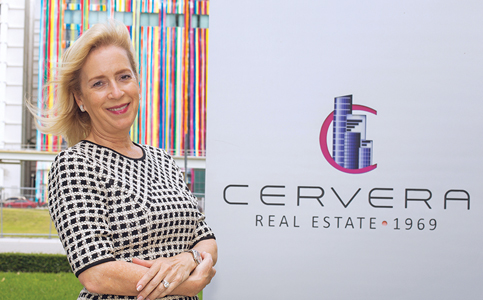 Like her mother and namesake who founded Cervera Real Estate more than a half-century ago, Alicia Cervera Lamadrid has a stalwart belief in Miami’s greatness that has continued to shape the city’s growing skyline.

As a child she accompanied her mother, Alicia Cervera, to construction sites and meetings with power players in the luxury condo world. Today, as managing partner of the firm that now boasts a third generation of Cervera women, she leads business development efforts.

“I’m often asked, ‘Why Miami now?’” she said. “I say that Miami is organically what every place in the world aspires to be. But while other places oftentimes do it through legislation and by forcing people to do things, we are just organically welcoming, inclusive and accepting.”

Ms. Cervera joined the company in the early 1980s and worked her way up through its ranks, leading sales on projects across South Florida, including prime Brickell Avenue high-rises Bristol Towers, The Imperial and Villa Regina.

Today, she oversees more than $4.5 billion in both pre-construction and general real estate assets. And over the last year, business has been booming.

“People who were on the fence about moving and were waiting for a change – a job or school – were waiting for the right time,” she said. “All of a sudden, it was the right time. Everything came to a halt. They had time. They learned they could work remotely. Their kids weren’t in school. All these things accelerated their buying decisions.”