Advertisement
The Newspaper for the Future of Miami
Connect with us:
Front Page » Government » Bidding nears for private developers of taller Government Center 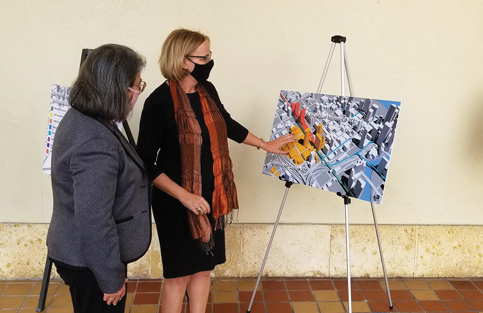 Miami-Dade is seeking one more round of public input before requesting a first round of bids from private builders to redevelop downtown Miami’s Government Center area into a taller, denser and more pedestrian-friendly metropolitan neighborhood.

The goal, said Eileen Higgins, the county commissioner leading the effort, is to begin preliminary processes this year for the area’s most development-ready parcels.

“I’m hoping by summer,” she said during a presentation March 25 about the project. “The goal is really to consolidate [public feedback] so that hopefully by sometime this summer [we] get something [on] this.”

Miami-Dade staff in June 2019 started work on a report for what is known as the Government Center Subzone, one of several Metrorail-adjacent clusters of county-owned properties the county has reclaimed zoning jurisdiction over since 2014.

The Government Center Subzone contains county-owned properties near the Stephen P. Clark Center spread across 27 acres, plus another group of parcels nearby on five acres.

With just 2.6 million square feet of existing uses, the area today is “very underutilized,” according to Jess Linn, a principal planner for the county, who said there is potential for more than five times that density with the right combination of development.

“It could easily accommodate 10 [million to] 15 million or more square feet of uses and would create a mass of activity that would be appropriate for downtown as well as take advantage of the infrastructure we have – the Metrorail and Brightline,” he said.

“It’s showcasing the possibilities for the revitalization of the downtown area,” Mayor Daniella Levine Cava said “We’re [seeing] this as an opportunity for urban lifestyle living, increased mobility, livability, health, affordability, job opportunities and everything else this project entails.”

Ms. Higgins said she would like to see a bus terminal moved inside the Stephen P. Clark Building so transit users can board Metrobus, Metrorail, Metromover and Miami trolleys at a single site that also connects to Brightline.

“It’s built and ready to go, and when Tri-Rail is in [at Brightline’s MiamiCentral Station], we’ll have that connectivity too,” she said. “You’ll never have to go outside.”

Some design and development standards for the project are in place. Up to 500 residential units are developable per acre. Sidewalks along all street frontages must be at least 15 feet wide.

But after nearly two years of studies, public workshops and consultations with county experts, the Miami Downtown Development Authority and architecture students from Florida International University, among others, there are few concrete plans for what to do with most parcels aside from general ideas of what is possible at each location.

“We know what the large goal is, what we need to integrate to make the neighborhood complete, [but] that will be tested against the rest of the market and other responses,” she said. “We’re going to let the market [and] private sector participate, be a partner in this and help us bring it to fruition.”

With office and retail uses likely to change post-pandemic, a major challenge will be determining the proper mix of real estate types across the area, said Nathan Kogon, assistant director of the county’s regulatory and economic resources department.

“There’s a pre-Covid and post-Covid answer to that,” he said. “We don’t know exactly. What we do know is this will be developed over many years. This will take time, and the demand will … be analyzed at the time of the [request for proposals].”

County materials showing what could be done with a few properties indicate a great consideration for housing. Further development of the Stephen P. Clark building could add 750-foot-tall buildings to the parcel’s footprint – the existing building rises 510 feet – and allow for the construction of up to 1,750 residential units.

Another parcel bounded by Northwest Second and Third avenues and Northwest First and Second streets occupied by county parking and fueling facilities could be rebuilt with up to 600-foot-tall buildings and 1,600 residential units. County documents describe the site as being “a blight in the area” now.

A site at 140 W Flagler St. that now contains an eight-story, 1970s-era office building and seven-level parking garage could be redeveloped with 700-foot-tall buildings and up to 600 residential units.

That parcel will be among the first the county will put out to bid, Mr. Linn said, “because it’s an empty building right now.”

The Cultural Plaza directly across from the Stephen P. Clark building, which houses the main branch of the Miami-Dade Public Library system and HistoryMiami Museum, represents enormous untapped developmental potential.

Buildings at the site could rise 750 feet and allow for 2,875 residential units, Miami-Dade documents show, and redevelopment of the elevated plaza could help the county realize the site’s untapped potential for ground-level uses.

“This is a valuable site, and we recognize as time goes on there will be pressure to develop [it],” Mr. Kogon said, adding that the plaza’s replacement could include new spaces for the library and museum. “It’s absolutely feasible and possible to incorporate a mixed-use development with equivalent civic area to accommodate these uses in the plan.”

Asked about the future blend of residential offerings, Ms. Higgins promised the area will “absolutely not’ be restricted to luxury units. The land being developed is county-owned and therefore is the property of Miami-Dade residents. As such, she said, it can and should be used to maximize public good.

“And public good means we’re going to have … affordability built into the mix here, which does not mean there might not be some high-end ones,” she said. “Some of these parcels might be allowed to have luxury or more expensive apartments, because that’s how the county is going to balance out the finances to make sure that we get all the benefits that we need … but you should expect mixed income. I think it makes a more interesting and integrated neighborhood.”

Mr. Kogon said residents can share their ideas and concerns about the project with him directly at Nathan.Kogon@miamidade.gov.