Advertisement
The Newspaper for the Future of Miami
Connect with us:
Front Page » Transportation » Last pair of Metrorail cars ordered in 2012 finally on track

Last pair of Metrorail cars ordered in 2012 finally on track 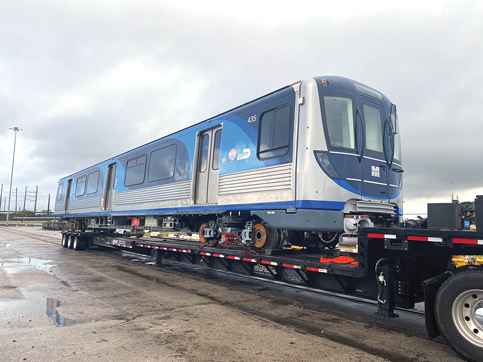 A more than 8½-year effort to replace Miami-Dade’s Metrorail fleet is nearly over, as the county last week accepted and is now testing the last pair of new railcars from manufacturer Hitachi Rail Italy before adding them to the system.

The two railcars are the last of 136 Miami-Dade ordered from Hitachi (formerly AnsaldoBreda) in June 2012. Each railcar cost roughly $3 million. About $313.8 million in funds generated by the countywide half-percent sales tax known as the half-penny went toward the purchase, a press note from the Department of Transportation and Public Works (DTPW) said.

In a statement Feb. 25, Mayor Daniella Levine Cava called the delivery “a major milestone for our county,” adding that “with other major transportation and mobility initiatives currently underway, introducing the new Metrorail cars is an important way we are updating and improving the transit experience for riders.”

Miami-Dade first expected that Hitachi would begin delivering its railcars by 2015, when its existing fleet by manufacturer Budd was 31 years old.

The first of the new railcars ultimately arrived in March 2017 and went into service that November as a four-car train, according to Buford Whitaker, former assistant director of rail services for the county.

Before going into service, each railcar must meet 41 requirements and undergo an up to four-week testing process, which includes running for 1,000 miles before being cleared to carry passengers.

In August 2018, citing a two-railcar-per-week delivery rate, Transit Deputy Director of Operations Steve Feil told Miami Today that, “short of anything catastrophic,” the last railcar from Hitachi would arrive by late 2020.

Beyond boasting the latest exterior and interior designs and mechanisms, the new Metrorail trains – assembled in Hitachi’s Medley facility – feature free Wi-Fi, bicycle racks, digital signs and high-efficiency air conditioning units.
“I know that these modern, sleek vehicles will continue to improve the transit experience for our riders,” outgoing DTPW Director Alice Bravo said. “I am incredibly proud that we have reached this amazing milestone in our county’s transportation history.”

Joe Curbelo, chairman of the Citizens’ Independent Transportation Trust, which oversees half-penny revenues, expressed similar sentiments, saying: “This has been a very important investment in the future of the county’s transit system and a vehicle fleet that the riding public can be proud of.”