Advertisement
The Newspaper for the Future of Miami
Connect with us:
Front Page » Transportation » Plans for Metrorail to north forecast to be derailed

Plans for Metrorail to north forecast to be derailed 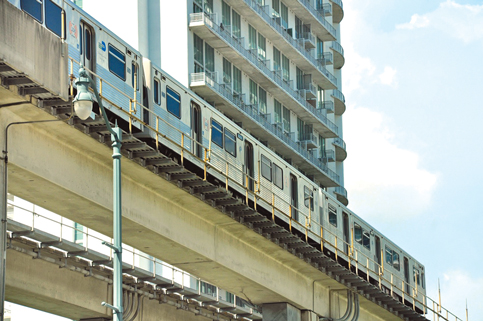 A Metrorail extension may be among the rapid transit upgrade proposals Miami-Dade receives for the 9.5-mile commuting route between the northernmost Metrorail station and the Broward County line, but it’s not what will ultimately be built there, Commissioner Joe Martinez said.

Miami-Dade expects in spring to receive responses to its request for proposals (RFP) for elevated transit on what the county calls the North Corridor, which runs along Northwest 27th Avenue beginning at the Martin L. King Jr. Metrorail station.

The likelihood of any of those proposals being both a long-promised Metrorail stretch and feasible, however, are nil, according to Mr. Martinez.

“[An] RFP may go out for rail, but in our world – or at least mine, where the sky is still blue and grey, not pink – it’ll never get done,” he said, citing cost projections that say building Metrorail could cost up to $250,000 per new passenger it attracts.

Adding difficulty to the matter, he continued, is that the funding mechanism meant to pay for the North Corridor upgrade and five others identified in a 2016 plan to expand and improve transit across Miami-Dade is drying out.

The half-percent sales tax known as the half-penny approved in 2002, which voters enticed by the promise of county-wide Metrorail service, has generated more than $3.7 billion, said the Citizens’ Independent Transportation Trust, the group that oversees funds the tax generates.

But according to information former mayor Carlos Giménez and Chief of Policy and Budgetary Affairs Jennifer Moon gave Miami-Dade officials and press in a September 2018 presentation, the half-penny will stop being able to support new transit expansions by 2024. It will be entirely tied up with debt service and contributions to cities, which get 23% of the tax’s annual revenue, and require support from the county general fund, they said.

“So yes, [the RFP] is going out there,” Mr. Martinez said last week. “People feel good. They listen to it. They hear about it. But the money just simply isn’t there.”

Miami-Dade’s transportation planning board – comprised of all 13 county commissioners, several municipal representatives and a school board member – loosened the language of a pending RFP for the North Corridor in February 2020 to allow for modes other than rail to be considered.

The board in October 2019 had selected an elevated fixed guideway “with a preference for rail” on the corridor between Northwest 79th and 215th streets.

State and county consultant WSP recommended Metrorail, which would take eight years to finish and was the second-costliest option behind monorail, at $1.9 billion.

But in less than six months, several commissioners started to walk back the decision, including Barbara Jordan, then the long-serving commissioner for Miami Gardens, the city the corridor mostly serves, who was behind the February 2020 move to loosen the RFP language.

Audrey Edmonson, then the county commission chairwoman, said she saw “nothing but issues” with building Metrorail.

WSP, which compared the mode with automated people mover, monorail and urban magnetic-levitation train, found that Metrorail easily was best in terms of ridership, with an estimated 16,200 daily riders, including 7,500 new users.

Every other transit solution, WSP said, would attract half that or less.