Advertisement
The Newspaper for the Future of Miami
Connect with us:
Front Page » Real Estate » Miami Station gets green light to replace ghost foundation 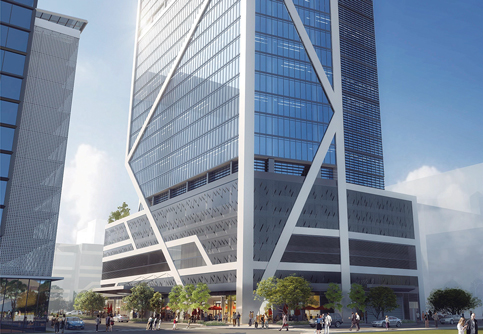 A plan to build a large high-rise in the heart of the city filled with offices, apartments, restaurants and shops has gotten the green light from a City of Miami review board.

On Feb. 17, the Urban Development Review Board unanimously recommended approval of the project, along with several conditions.

The site is at the southwest corner of Northwest First Court and Sixth Street, where a mass of concrete and rebar – the ghost foundation of a tower never completed – has sat since 2006.

An earlier owner had a plan for a tower on the site approved under the city’s former zoning code before the enactment of Miami 21.

In 2019, a new owner proposed a project called Krystal II. That plan included a 32-story tower with 154 residential units, about 79,180 square feet of offices and 4,400 square feet of commercial use. Parking in the pedestal was designed for 251 vehicles.

That project was recommended for approval by the review board but never built.

The latest proposal adds nearly 10 floors and more than doubles the parking spaces.

The office space would take up 12 floors.

While the Krystal II proposal included building onto the 2006 foundation – the start of a parking podium – this latest proposal would remove the structure and start from scratch.

Brian A. Dombrowski, an attorney representing the developer, told the board: “We expect a lot of foot traffic on Sixth Street.”

The tower will be made of glass and aluminum panels, with floor-to-ceiling glass and no balconies on the upper floors. The plan calls for three to four floors of “spectacular board room space,” he said.

Horizontal metal panels or strips are a key component of the unique façade planned.

Board member Anthony Tzamtzis asked how the project will differentiate access to the building for residents and for office workers.

Project architect Kurt Dannwolf, of ODP Architecture & Design, explained the building will only have one access to the parking levels, for entry and exit.

Board member Dean Lewis asked about the inspiration for the design.

“The owners asked us for something different … most buildings have balconies in Miami,” said Mr. Dannwolf.

Having no balconies and floor-to-ceiling glass makes for more interior space “and spectacular views all around,” he said.

The structure is framed by a diagonal band that runs through the entire building, he said.

Mr. Dannwolf described it as a series of diagonal laser-cut metal panels, which serve to allow air flow-through and block view of the vehicles.

“I like the building,” said board member Ignacio Permuy. “I like the project. It’s pretty straight forward, simplistic (elements) but they work well together.”

He did suggest adding a different material for the striping and a different color for the façade.

“Those white bands are so powerful,” Mr. Permuy said.

Board Chair Willy Bermello also commented on the framing or horizontal banding, suggesting some board members may be grappling with the aesthetics of the banding.

“Typically, when we see diagonal banding it usually means something other than a decorative design,” he said. “The exoskeleton on the exterior, its structure, there’s a reason for it. Here it’s just decorative.”

He also said the turning radius in the garage level needs to be redesigned and enlarged.

The board’s motion to approve had several conditions including: better articulation of the difference between the residential and office uses, in terms of the arrival at the ground level lobby and parking area; consider some differences in the façade; glazing on residential levels will not be reduced from the percentage shown in current plan; rework the turning radius and parking ramps; reconsider the location of the trash chutes; and reconsider the banding on the tower side of the building.

The property is across the street from the new 3 MiamiCentral development, and one block from MiamiCentral transportation hub and Brightline passenger rail service.