Advertisement
The Newspaper for the Future of Miami
Connect with us:
Front Page » Government » County benches Miami Marlins profit split offer in sale 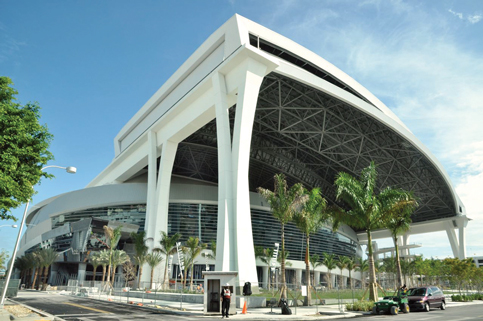 Miami-Dade has called a two-week timeout to confer with county attorneys on a lowball settlement pitch from the former owner of the Miami Marlins. Some officials say the offer reeks of foul play.

Commissioners Tuesday deferred to Feb. 17 consideration of a $4.2 million payment from former Marlins owner Jeffrey Loria, who sold the team to Bruce Sherman, Derek Jeter and partners in 2017 for $1.2 billion.

County attorneys said they would meet with each commissioner between now and then to brief them on the details of the lawsuit the county and city filed against Mr. Loria in 2018.

Under the terms of the offer, Miami-Dade would get about $3.64 million and the City of Miami would get the remainder, a Feb. 2 memo from Miami-Dade CFO Ed Marquez said.

Bonds the county and city sold to help fund construction of the ballpark in Little Haiti are projected to cost taxpayers more than $2.6 billion to repay.

“We were suckered and taken in,” said Joe Martinez, who voted against the stadium agreement in 2009. “This was the worst deal that the county has ever entered. When you have professional negotiators dealing with amateurs, which we had here, and you have an administration at that time of [mayor Carlos] Alvarez and [county manager George] Burgess, who really wanted to leave a legacy project, this is what we get.”

Mr. Martinez said Mr. Loria’s offer was “nowhere near what we could get.”

According to the agreement the three parties signed, he’s right. The stadium construction deal with Mr. Loria’s group, then called Miami Marlins LLC, said the county and city would together receive 5% of the net proceeds of the team’s sale if it happened within six years of “substantial completion” of the ballpark.

In February 2018, Mr. Loria cited an array of deductions and losses allowed in the stadium contract, including nearly $300 million in tax payments, to support his claim that he sold the team at a loss of $141 million and, as such, owed the county and city nothing.

The county sued two weeks later, and the case has since been moving through the courts. Most recently, the Third District Court of Appeal ruled that the county, city and company enter binding arbitration.

Much of the county’s evaluation is based on incomplete data, said Sally Heyman, who joined Mr. Martinez and then-commissioner Carlos Giménez more than a decade ago in voting against the stadium deal.

Some aspects of Mr. Loria’s new settlement offer, she said, evoke traits of the deal back then that she deemed unacceptable – prime among them, a lack of forthcomingness.

Assistant County Attorney Monica Rizo confirmed that was true but said her office had doubts as to how much more information it could get through discovery during arbitration, the result of which would be uncertain.

“Based on the material of the limited discovery we’ve received to date, we would say this settlement is within the bounds of reason,” she said.

But Ms. Heyman nonetheless vowed to vote against accepting the settlement offer in its current form without vetting the figures Mr. Loria’s attorneys gave the county.

“You can’t play on a public field without playing by public rules, so I’m saying we do need to carry on this issue to negotiate and get answers to our questions that [aren’t from only] one source,” she said. “I’m saying it’s time we got the information.”