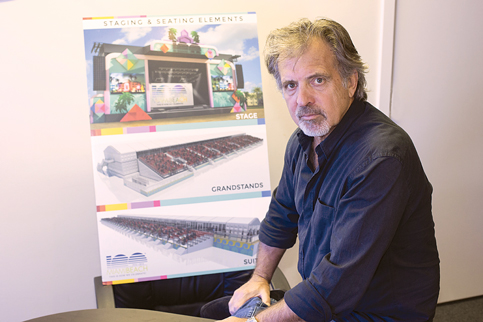 Miami-Dade County’s film industry has been one of the hardest hit during the pandemic, which forced production crews to carry adopted safety protocols into the new year, making the county one of the safest destinations to film, local top film and entertainment executives say.

As Covid-19 vaccinations start to take hold, the county’s filming industry is prepared to welcome back production crews from around the world and ensure the absolute best safety protocols and scenarios, said Bruce Orosz, CEO of ACT Productions and Greater Miami Convention & Visitors Bureau chairman.

“This destination has not changed, it’s probably even better. We have created these special circumstances of quarantined bubble-like productions with about 100 hotels throughout Miami-Dade,” Mr. Orosz said. “Production crews are now using safety monitors that can help facilitate production and maintain the right protocols on the set, that give the producers and the local community confidence that all will be managed properly.”

On Jan. 21, Florida Sen. Joe Gruters of Sarasota filed an entertainment industry bill that would create a film, television and digital media targeted rebate program. If passed, the program would replace one the state launched in 2010 that was later unfunded in 2016. That program’s $242 million tax credits went to productions filming in Florida.

The state needs to understand that the film production industry can bring back the economy quickly. This industry can bring back tourism and a lot of other industries, including hospitality, said Sandy Lighterman, the county’s film and entertainment commissioner, regarding the film industry bill being pushed in Tallahassee. “Especially with the pandemic and people who are out of work, it’s easier to train people in our field and make those programs possible.”

“Legislatures need to also realize that the film and entertainment incentive and most robust program in 2010 was passed because of the downturn of the economy,” she said.

The industry is hopeful that the leadership in Tallahassee will see the value and make it a part of their call for action, Mr. Orosz added.

“Other states around the country that have incentives are having success at our expense with projects moving to those places, like North Carolina,” he said. “We need Tallahassee to take a stand and see the value and push this through. It’s too important and vital for our economy.”

In December, Miami Today reported that county commissioners unanimously urged the Legislature to fund a state rebate for productions, citing “high unemployment rates and a sinking economy resulting from Covid-19.”

Florida has since “lost more than 70 major films and television projects that would have spent $1.3 billion statewide, creating 110,000 cast and crew jobs and would have booked more than 220,000 hotel room nights,” District 6 Commissioner Rebeca Sosa told state legislators.

In efforts to bring more production companies and employment to the area, Miami-Dade has its own incentive program, which offers a $50,000 tax credit to productions spending $500,000 up to $1 million and $100,000 to productions surpassing $1 million. To qualify, productions must hire 70% of cast, crew and vendors locally and shoot 70% here.

Since its 2017 launch, the filming incentive program has had a total of 12 productions, including “Red Table Talks: The Estefans,” Ms. Lighterman said.

“There are several (production companies) that are circling the airport, but have not yet landed,” she said. “There are so many pieces of the puzzle for these productions to put in place, even more than before, with some possibly starting production later on in the year.”