Advertisement
The Newspaper for the Future of Miami
Connect with us:
Front Page » Government » Drive heads toward broader use of tax-funded transit-on-demand

Drive heads toward broader use of tax-funded transit-on-demand 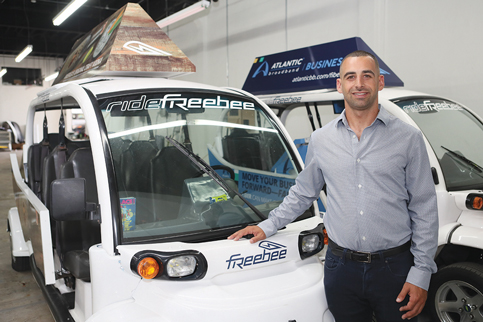 Every city in Miami-Dade could soon be getting its own Freebee service or something like it, with greater destination and pick-up point options.

Miami-Dade commissioners Tuesday gave an initial OK to an ordinance change that, if approved, would significantly broaden how municipalities can operate transit tax-funded on-demand ride services like Freebee.

Cities today receive about 23% of funds from the “half-penny” tax voters approved in 2002 to expand and improve transit and transportation across Miami-Dade. County law stipulates that cities must spend 20% of that apportionment on transit services, including on-demand ride services.

But the rules are restrictive. Trips must begin or end solely within city boundaries, at a Metrorail station, South Dade Transitway bus shelter or public park-and-ride facility.

Those requirements are fine for bigger cities like Miami, Miami Beach and Doral and those abutting its north-south transit trunk like Coral Gables, Palmetto Bay and Pinecrest, said Commissioner Sally Heyman, the item’s sponsor.

But for others like Biscayne Park, which doesn’t even have a Publix, CVS or Post Office within its borders, much less a connection to a transit station, those limits have kept the city from being able to spend the money, which now has accrued to more than $100,000.

“They just didn’t have anything eligible,” she told Miami Today. “The city was under pressure. They had it accruing and would have to return it because they’re not using it.”

With this change, she said, “they could use it to take them to things essential – to school, a drugstore, grocery market, things like that.”

The ordinance change, which is next subject to a public hearing Jan. 13, would delete much of the limiting language now on the county’s books. Rides would still be for five miles or less, but municipal residents could use the service for trips to essential destinations – in or outside their city’s borders.

Ms. Heyman confirmed inter-city travel on the services would be possible under her proposed new rules, adding that she intentionally left out a lot of limiting language in the ordinance change to allow for more localized oversight.

“It’s the cities’ money that they’re getting back,” she said. “I don’t want to micromanage. We’ll leave it up to the city councils, who will be conscientious about it. They won’t be going to the Calder racetrack or Magic City to gamble.”