Advertisement
The Newspaper for the Future of Miami
Connect with us:
Front Page » Top Stories » Miami Waterkeeper moving aggressively to save Biscayne Bay 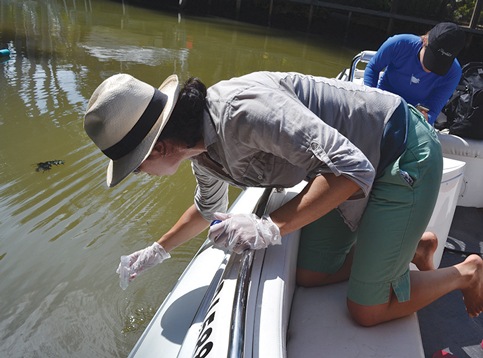 Miami Waterkeeper, a 10-year-old organization that advocates for South Florida’s watershed and wildlife, is aggressively involved in saving Biscayne Bay, whose endangered status has been exposed in recent months by a number of fish kills due to oxygen deprivation.

In a proposal last year to partner with Miami Waterkeeper, county commissioners expressed concern that, while water quality is normally addressed at state and county levels, monitoring along the bay’s urban shoreline needed to be expanded to better identify sources of fecal-indicator bacteria.

“This contract was delayed due to the Covid-19 shutdown,” said Executive Director & Waterkeeper Rachel Silverstein. “In fact, we collected only one set of samples before sites were closed.”

The Waterkeeper team was able to resume weekly sampling in early May, she said.

Miami Waterkeeper was also the local partner on grant funding for the Biscayne Bay Habitat Focus Area, one of ten places around the country where the National Oceanic & Atmospheric Administration, or NOAA, supports existing programs through partner organizations to more effectively address the growing challenge of coastal and marine habitat loss and degradation.

“The area,” said Kate Goggin, NOAA Fisheries spokesperson, “was selected in part to identify the nutrient sources that negatively impact the bay’s water quality and determine the most effective restoration solutions. Identifying and addressing these nutrient sources is critical to avoiding events such as the recent fish kill.”

“Biscayne Bay and its reef support an astonishing array of marine species,” she said, “and are favorite destinations for recreational pursuits such as fishing, boating, kayaking, snorkeling, swimming and diving.

“Water-based tourism and recreation are major sources of revenues, jobs and income for the Biscayne Bay and Miami area.”

Ms, Silverstein said Miami Waterkeeper has focused efforts on the Biscayne Bay Habitat Focus Area since 2015. “In cooperation with academic partners,” she said, “we have achieved a number of successes in our time working on Habitat Focus Area issues. We’re now wrapping up a final report.”