Advertisement
The Newspaper for the Future of Miami
Connect with us:
Front Page » Government » Miami board again votes against a downtown Melo skyscraper

Miami board again votes against a downtown Melo skyscraper 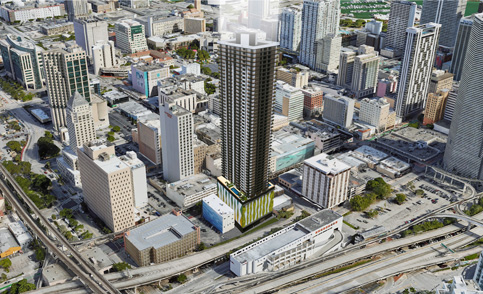 A Miami review board has unanimously recommended denial of plans for a skyscraper downtown from The Melo Group, advice the outgoing city planning director ignored for another Melo project that is now rising.

The denial vote Oct. 21 is rare for the Urban Development Review Board, whose role is to advise the planning director.
The latest Melo proposal, Downtown 1st, is a 58-story, 537-foot residential tower at 30 SW First St. with 560 housing units, 12,930 square feet for offices, 2,925 square feet for commercial-retail, and a parking pedestal for 453 vehicles. It sits west of South Miami Avenue, between Southwest First Street and an I-95 on-ramp.

The motion to deny specifically mentions “due to the orientation of the building.”

An attorney for Melo wrote to the city, “The Property is located within the City’s Urban Core in the Central Business District, an area of the City which is being revitalized through new residential, commercial and office uses.”

Board members opposed the building’s size and placement on the site, locations of two swimming pools, and requested waivers including reducing required setbacks.

More than half-dozen waiver requests seek to reduce the drive entry width, increase lot coverage, reduce front and side setbacks above the eighth floor, and more.

The Melo attorney wrote, “The Property is a narrow, irregularly shaped site which fronts one (1) accessible street (SW 1st Street) and the I-95 on-ramp which does not provide access to the Property. These unique conditions create practical difficulties in strict adherence to certain Miami 21 [zoning code] requirements … [the waivers] are consistent with the guiding principles of Miami 21.”

Board member Anthony Tzamtzis called the proposed tower “excessive, monolithic, too much,” and expressed frustration regarding Melo: “we’ve seen this type of work before; we turned it down but then in gets approved.”

In 2019, the board unanimously recommended denial of another Melo project, the twin-tower Downtown 5th at 55 NE Fifth St., but Planning Director Francisco Garcia subsequently approved it. Construction began in late December.

Of the current proposal, Mr. Tzamtzis said, “I have some reservations about this building … (and) a bitter impression from the last time you guys showed up. We turned down the building but the building was approved later. How do you think I feel about whatever we say and do, you get the building approved after all?”

Board member Robert Behar said, “I think you’re just putting a lot onto this site. It’s not the best building that we could potentially get there … I’m not really in favor trying to maximize the envelope to the fullest.”

Developer Carlos Melo replied, “I feel this building is a very great product for the market we’re focusing on … I don’t see what the problem here is … I don’t share your positions.”

Board Chairman Willy Bermello said “we have an applicant who believes he is correct and (isn’t listening).” Earlier, he said, “It is hard to be excited with this project, with all the waivers and the architecture not being up to par. I have issues with what I have before me.”

Mr. Bermello later asked for more dialog in general between the incoming planning director and the board – Mr. Garcia has resigned effective Nov. 6. The board asked staff to set up a meeting with his successor in November or December.