Advertisement
The Newspaper for the Future of Miami
Connect with us:
Front Page » Business & Finance » Biscayne Boulevard residential tower with grocery wins OK 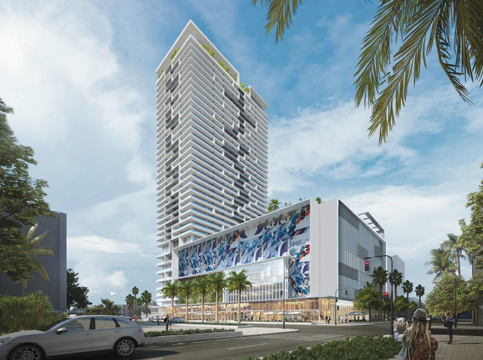 A large development bringing together more than 500 residential units and a major grocer has garnered a positive vote.

Crescent Heights of America Inc. and its affiliated entities propose 2900 Biscayne, a 38-story mixed-use tower on land at 2900 Biscayne Blvd., and the city’s Urban Development Review Board unanimously recommended approval.

Ethan B. Wasserman, an attorney representing the owner-developer, said the project is planned for a great location in Edgewater.

“Most importantly, our large ground floor grocer is nationally renowned and not currently in this area. We have a signed lease and it’s very important that we build this project as soon as possible,” he said.

The property contains a net lot area of 69,665 square feet or 1.599 acres. As part of the redevelopment, Mr. Wasserman said, the owner is simultaneously replatting the property to vacate several private alleys.

Mr. Wasserman said the neighborhood grocer that has committed to the project has numerous requirements and conditions and it was important early in the project for the developer to work closely with the planning and zoning staff to satisfy all parties.

“We consulted with staff early on,” he told the board.

The project was designed by Arquitectonica. Principal Bernardo Fort-Brescia reviewed details of the site plan and design to the board.

The podium will be 97 feet, which is lower than permitted, he said. The grocer will take up about 49,000 square feet of the ground floor.

“We have liner units hiding the parking garage,” Mr. Fort-Brescia said, with liners on five levels.

“We’ve done our best to conceal the parking,” he said, noting the particular value of meeting parking needs for customers of the grocer.

“Many people do come with their car to get groceries and load them up,” he said.

Board Chair Willy Bermello asked if the grocery patrons and the residents of the building will enter the garage levels at the same entrance.

Mr. Fort-Brescia said they access the garage at the same location but are split in different directions on level two.

Board member Robert Behar said it is a great looking project. He acknowledged how important it is dealing with what a grocer needs for operations. “It can be a challenge and you’ve done a fantastic job. The project looks great for that area. Congratulations, it’s beautiful.”

Mr. Bermello added, “It’ll be great for the entire neighborhood.”

The developer is requesting several waivers to the zoning code, including:

■Permission to allow development of the ground level to match the dominant setback of the block and its context.

■A 10% reduction of the frontage setbacks above the eighth floor.

■Along a primary frontage, parking above the first story to extend into the second layer along the frontage, if an art, glass or architectural treatment of a design approved by the planning director, with the recommendation of the UDRB, is provided for 100% of that portion of the façade.

■Along a secondary frontage, above ground parking to extend into the second layer beyond 50% of the length of the frontage, if an art, glass or architectural treatment of a design approved by the planning director is provided for that portion of the façade.

■Up to a 30% reduction of required parking for a development within one-half mile of a transit-oriented development (TOD) or one-quarter of a Transit Corridor.

■An increase to the loading driveway entrance from 30 feet to 33.