Advertisement
The Newspaper for the Future of Miami
Connect with us:
Front Page » Healthcare » Fewer than 1% download Covid contact tracing app 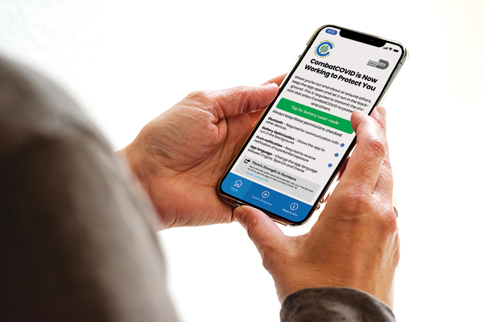 It’s been more than a month since Miami-Dade unveiled its mobile contact-tracing app. So far, despite promotional efforts by the county and the app’s potential to help stem the spread of the novel coronavirus, the rate of adoption has been dismal.

CombatCovid MDC, Miami-Dade’s mobile contact-tracing app, officially launched on both major mobile device platforms Sept. 16. To date, the app has been downloaded about 8,500 times – roughly 7,250 times on Apple devices and 1,250 times on Android.

Assuming each download represents a different resident, that means just over 0.3% of the county population over age 10 are possibly using the app. That rate is far below what’s recommended in a widely cited Oxford University study from April, which said that while a 60% opt-in rate is optimal, contact tracing apps can still be effective at lower rates.

And the goal is, of course, to reach a much greater usage rate, said Jacques Bentolila, deputy director of Miami-Dade Internal Services, the county point person for the app.

“The more people who have it downloaded and are using it, the more effective the tool,” he said. “It’s just adding to your toolbox in combating Covid – tools such as social distancing, masking up and other things in addition to having a number of people carrying this app. It makes it a more effective and robust program, and that’s how we’re looking at it.”

Compared to other apps, CombatCovid is relatively accessible and non-invasive. Available in English, Spanish and Creole, it requires no personal or locational information. Instead, the app uses a phone’s Bluetooth capabilities to communicate with other devices that also have the app installed and running. If a user comes near another app user who self-reported being positive through the app, the app will notify the user of a potential exposure and urge the user to isolate, get tested and, if tested positive, to also self-report.

The emphasis on privacy was “a big plus” when Miami-Dade Mayor Carlos Giménez considered it for the county, Mr. Bentolila said. So was its prior adoption by Palm Beach County and the possibility that Miami-Dade’s immediate neighbor to the north would also license the app.

“The mayor thought for the tri-county area that if we all had the same app, it would add benefit because there’s so much mobility between our three counties,” Mr. Bentolila said.

Shield Group Technologies did not respond to an interview request.

There was talk of Broward County also using the app, as reported in July by the South Florida Sun-Sentinel, but a Broward app is still missing from app stores.

Mr. Bentolila confirmed that Miami-Dade paid $775,000 to license CombatCovid. The cost, broken down by download, works out now to be about $13.25 per person. Palm Beach paid $875,600 for the app from its Cares Act apportion, the Sun-Sentinel reported. Mayor Giménez said last month the app will be available here for “the next three, four years.”

But while he touted CombatCovid’s potential, the mayor also fretted over residents’ reluctance to paticiapte. For the first time since around April, virus-related hospitalizations dropped below 500 by mid-September. Still, roughly half the population is “refusing” to take part in any contact-tracing efforts, he said.

Time will tell if that remains the case, but Mr. Bentolila said a benefit of Miami-Dade’s multi-year license of the app is that it affords the county flexibility in responding to future viral emergencies.

“A part of the contract is the ability to tweak it so the tool can continue to assist us in the future,” he said. “It can link to all our current resources on the website and into scheduling testing. There’s a lot of benefit to having it in the palm of your hand, and it’s never going to be in its final form.”

Outside the two digital stores, Mr. Bentolila said his office hasn’t received much feedback. “Which is a good thing, right?” he said. “It’s not the kind of app where you’ll get a lot of ratings like Waze. It’s like an insurance policy. You have it just in case and hope to never need it.”