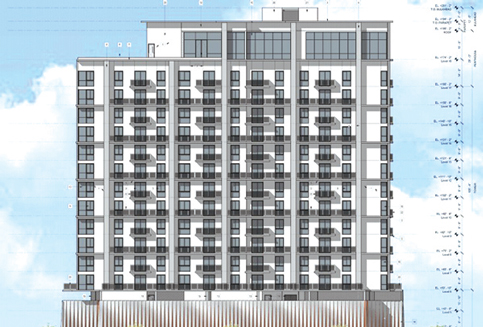 A mixed-use residential development is being proposed for the area where Edgewater meets Midtown in the City of Miami, and not far from Wynwood.

Called 27 Edgewater, the planned 18-story building would rise at 2728 NE Second Ave. and be home to 108 dwellings.

The project by developer 908 Group Holdings LLC was recently reviewed by the city’s Urban Development Review Board and unanimously recommended for approval.

The entire building would be 198,572 square feet and include a parking pedestal to hold up to 177 vehicles. The plan also calls for 4,600 square feet of commercial-retail space.

Attorneys Ethan B. Wasserman and Marissa A. Neufeld represent the developer.

In a letter to the city, Mr. Wasserman said the project will contain 108 multi-family apartments and ground-floor commercial space.

“One of the Project’s essential programmatic features is the rooftop amenity and pool deck, which take advantage of sweeping City views,” he wrote. Corwil Architects Inc. designed the project.

Ms. Neufeld spoke to the board during its meeting and said, “Sometimes garage screening is seen as somewhat of an afterthought. This is a unique feature of this building.”

That proposed screening façade on the pedestal was described in a prerecorded video shown to the board by Albert Cordoves, one of the founding members of Corwil Architects.

The inspiration for the art treatment on the garage screening is the location of the project, so close to Edgewater and the Wynwood Arts District, he said.

The screening will express a waters theme and mix in the dynamic colorful treatment of Wynwood.

The screening will be a wave pattern of curving aluminum ribbons, said Mr. Cordoves. The design will allow natural light and ventilation for the parking levels, he said.

Board member Ignacio Permuy said, “Very nice presentation. When I first saw these renderings, it clashed a little bit, but hearing the concept I think it will work very well.”

Ms. Neufeld said the color scheme was going to be teal, but they now plan an “orangey-red” to better represent Wynwood.

Board member Fidel Perez called it a “pretty nice project.”

Chairman Willy Bermello praised the project design. He mentioned appreciation of the color and suggested even more of a splash of colors.

“If you were in other parts of the city, I would not even suggest it, but here (near Wynwood) urban walls are part of the mosaic of the landscape.

“Instead of Sherwin-Williams gray (on the upper levels) why not make the whole thing look like a piece of art, not just the base?” said Mr. Bermello.

Ms. Neufeld said, “We can explore introducing other colors throughout … We can definitely explore that with staff.”

As part of the motion to recommend approval, Dean Lewis offered a recommendation for “a stronger push on three dimensional aspects” of the façade.

The developer is requesting waivers, including:

■To permit, along a primary frontage and a secondary frontage, parking above the first story to extend into the second layer along the frontage, if an art, glass, or architectural treatment of a design approved by the planning director, with the recommendation of the review board, is provided.

■To reduce the required drive aisle width from 23 feet to 22.

■To allow a 10% decrease in the side setbacks above the eighth floor. The property is narrow, which presents a challenge in trying to locate all the required features within the footprint of the building.

■To allow substitution of one commercial loading berth for two residential berths.