Advertisement
The Newspaper for the Future of Miami
Connect with us:
Front Page » Real Estate » Jungle Island hotel squeezes past a city board

Jungle Island hotel squeezes past a city board 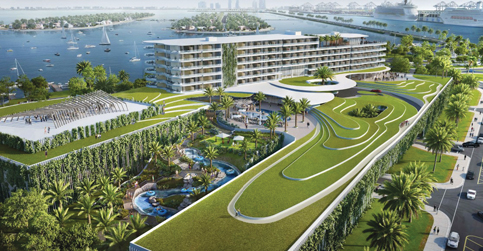 The plan to construct a hotel in Jungle Island park on Watson Island moved forward last week after it met criticism from some members of Miami’s Urban Development Review Board.

It took three tries to get a motion passed recommending approval, including several recommended changes.

Jungle Island is operated by a private company at 1111 Parrot Jungle Trail, on property owned by the City of Miami, on the island between the city and Miami Beach.

The Oct. 1 review included a lengthy debate about how city leaders over the years have squandered valuable city-owned waterfront properties.

The first motion made was to deny the project, but it died on a tie vote.

The second motion was to recommend approval with conditions. It also died on a tie vote.

It took Chairman Willy Bermello changing his stance and vote to eventually support the project, after first voting to recommend denial.

The main criticism was that design of the hotel was not exceptional, even though it was to rise on an exceptional property.

“Then you have this – it reminds me of a Howard Johnsons from the ’60s. An opportunity missed,” said Mr. Bermello.

He was also critical of the plan to build a parking garage with ramps leading up to the entrance of the hotel.

“You can dress it up but you’re still going through a garage on the way up,” Mr. Bermello said.

The hotel and garage are to be at the southern end of the property, connected to both the Japanese Gardens and the Jungle Island theme park.

Applicant ESJ JI Leasehold LLC is requesting approvals for the hotel and garage as a Special Area Plan, or SAP, under Miami 21 zoning.

The hotel would have up to 300 rooms, and the garage would hold about 783 vehicles. The existing garage would be demolished. Two existing conference buildings would be incorporated into the new construction. The hotel is designed at 11 stories, or 109 feet, 6 inches.

ESJ is represented by attorney Spencer Crowley. The hotel and garage were designed by EoA Group, a Coral Gables architectural firm.

In a letter to the city, Mr. Crowley wrote: “In August 2018, City voters approved a Charter amendment to waive competitive bidding and approve a fifth modification to the Lease, which allowed for development of a new hotel and attractions at Jungle Island, with a maximum 130-foot height.”

As part of the amended Lease, ESJ is now proposing a themed hotel with up to 300 rooms and new attractions at Jungle Island, along with parking and ancillary improvements containing about 10,000 square feet of retail/restaurant space and 12,000 square feet of meeting rooms.

Mr. Crowley said development under the lease remains subject to the applicant obtaining requisite land use and zoning approvals.

“To permit the hotel component of the Project, Applicant is seeking to rezone a 5.38 acre portion of Jungle Island to T6-12-O, and to amend the comprehensive plan designation for this same area to Restricted Commercial … Applicant is also seeking to designate the entire 18.61 acre leasehold area as the Jungle Island Special Area Plan (‘SAP’) in order to vest, from a regulatory perspective, the rights conferred through the Lease to develop the new hotel, attractions, and other improvements,” Mr. Crowley wrote.

Some board members suggested deferring the project, but the board is only allowed to recommend approval or denial, with recommendations or conditions.

City staff reminded the board that a deferral would have to be agreed to voluntarily by an applicant.

Mr. Crowley told the board ESJ is facing deadlines imposed by city ordinance and wanted a vote.

He also said the project has yet to go before the Planning, Zoning & Appeals Board.

Before the board’s first vote, Mr. Bermello said he wanted to explain why he intended to vote against the project.

“The city has two very important islands, Virginia Key and Watson Island. Waterfront property is something so limited and of great value to the city … most precious to its citizenry. Without an entire master plan (for Watson Island) this is problematic. We approach projects on a piecemeal basis … I have an issue with just the whole concept,” Mr. Bermello said.

The final vote – the motion to recommend approval – recommended that the applicant reevaluate the location of the swimming pool to a higher level with views, reconsider design of the entrance into the hotel, with views, and add further detail to the architecture of the hotel.

4 Responses to Jungle Island hotel squeezes past a city board