Advertisement
The Newspaper for the Future of Miami
Connect with us:
Front Page » Government » Faulty Metrorail sound barriers finally near replacement 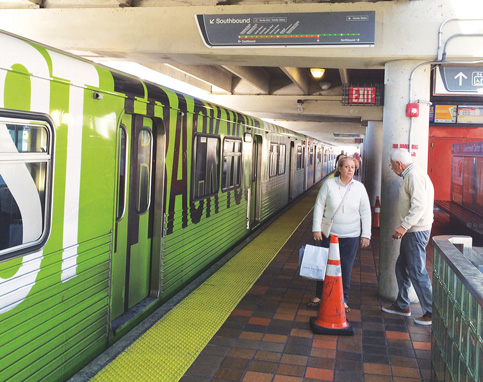 Two years after parts of a Metrorail sound-buffering barrier failed and caused system-wide delays, Miami-Dade is close to hiring a company to replace it.

The first of two projects that together will cost about $75 million comes seven years after a consultant told the county the acoustic barriers, erected when Metrorail was built in the 1980s, needed replacement.

Commissioners are to decide Oct. 6 whether to award Halley Engineering Contractors Inc. about $35 million to replace barriers beside residences and hospitals over 550 days. The contract includes a 55-day contingency, bringing the period to 605 days and allowances for “unforeseen work.”

Funding is to be from the People’s Transportation Plan, the main source of which is a countywide half-penny sales surtax.

The first construction phase, if approved, will be on segments of the 24.4-mile Metrorail line that run near hospitals and residential buildings, Alice Bravo, Department of Transportation and Public Works director, told a county transportation committee last month.

“Anything residential within 150 feet of the guideway, that’s what we want to prioritize first,” she said.

The project is to take so long, she said, because all work will be at night so it doesn’t disrupt service. The county split the project into two contracts “to align with the availability of funding.”

On July 3, 2018, a cracked acoustic barrier leaned toward the elevated Metrorail track and a train hit it, damaging the train and delaying service. On April 19, 2019, almost identical damage occurred, the Miami Herald reported.

Potential danger from the failing structures was forewarned. Engineering consultant Atkins advised the county in 2012 to remove the structures before they became an issue.

A Category 1 hurricane or “extremely strong microburst weather event” could be enough to crumble the barriers, an Atkins report from the time said. The county responded by beginning to remove some, but not most, of the barriers.

Two months after the April 2019 incident, Miami-Dade awarded $6.9 million in contracts to remove the remaining barriers. That work ended in December 2019.

Since then, work to replace the barriers has come behind the scenes. In May, the transportation department requested bids to construct the first phase. Then a “non-mandatory pre-bid teleconference was held on June 4, 2020,” a memo from Deputy Mayor Jennifer Moon said.

Eileen Higgins complained Sept. 10 that the directive from her and her commission peers that the transportation department “make sure that this procurement was accelerated” was not followed.

The pending contract for half the overall project is coming five months later than when transportation and the county Internal Services Department said it would, she said.

While transportation and other departments dawdled, she continued, the areas prioritized in the first project phase have had to endure sleep-disrupting noise from trains passing by at least every hour.

“Obviously, this is a terrible procurement,” she said. “I’m not happy about it. Transit is supposed to make everybody’s life better. The people who ride it aren’t stuck in a car, and the people who live by it should not be kept up at night.”

One Response to Faulty Metrorail sound barriers finally near replacement