Advertisement
The Newspaper for the Future of Miami
Connect with us:
Front Page » Profile » Virginia Jacko: Leading further growth of Miami Lighthouse for the blind 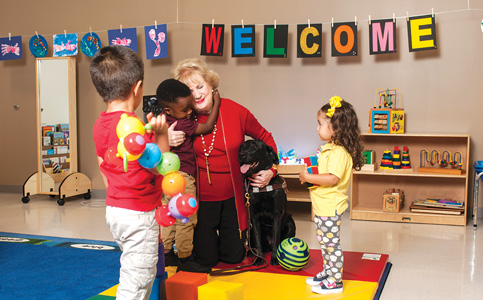 Virginia Jacko was more than two decades into her career as a financial and administrative executive at Purdue University when she began having trouble reading printed documents. The contrast was off, she said, but the problem was that only she saw it.

She visited an eye doctor who referred her to the Bascom Palmer Eye Institute in Miami. The trip proved fateful.

“Little did I know at the time that there was a gentleman named Dr. Bascom Palmer who was chairman of the board of a place called the Miami Lighthouse for the Blind,” she said. “If only there was some foreshadowing, I’d be like, ‘Wow.’”

The prognosis for her condition was serious. The degenerative eye disease she had, doctors said, could lead to total blindness. Her daughter, whose research focused on digital readability for the visually impaired, recommended that she relocate here and attend Miami Lighthouse, the first agency in the United States to rehabilitate adults for mainstream competitive employment.

On Jan. 3, 2000, she started as a client. By the time she finished learning Braille, all her eyesight but for the ability to detect a small amount of light was gone. But by then she’d found her passion.

“I needed to help the blind,” she said. “I thought if they only ran the place like a university, it could be so much.”

Over the next five years, she volunteered, first giving speeches and doing whatever work needed doing. Ultimately, she was invited to join the board of directors and, after a couple meetings, she became its treasurer.

Almost five years to the day that she first walked through Miami Lighthouse’s doors, the nonprofit’s then-CEO abruptly left. Ms. Jacko was asked to serve as interim CEO. After six months, during which she led work on a slew of successful grant proposals, she officially became Miami Lighthouse’s first blind president and CEO.

Ms. Jacko in the 15 years since has increased program participation at Miami Lighthouse fiftyfold, grown its physical space nearly five times over and spearheaded partnerships and mergers to vastly expand its reach.

For 12 straight years, Miami Lighthouse has had a four-star rating on Charity Navigator, ranking among the top 1% of nonprofits nationwide based on its strong financial base and broad transparency.

“I’ve had the privilege to prove that a totally blind person could achieve and be a great CEO, not defined as a blind CEO but a CEO who just happens to be blind,” she said. “Miami Lighthouse helped me learn that when I lost eyesight, I didn’t lose vision.”

One Response to Virginia Jacko: Leading further growth of Miami Lighthouse for the blind