Advertisement
The Newspaper for the Future of Miami
Connect with us:
Front Page » Business & Finance » Miami Wilds water park near zoo flows toward county deal 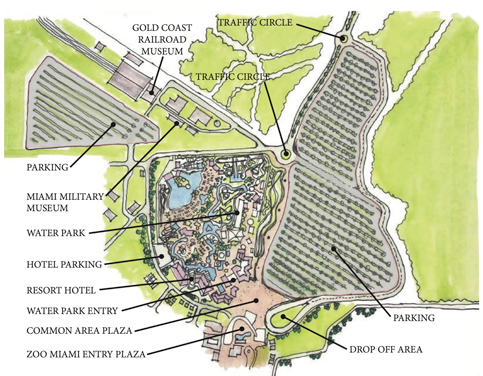 A long-sought deal for a water park beside Zoo Miami is near, with terms between Miami-Dade and developers awaiting signatures.

A county commission committee Friday is to review a lease with Miami Wilds LLC, the team behind Miami Wilds park, hotel and retail spanning 27.5 acres near the zoo and two museums. If it advances, the lease is subject to a full commission final vote.

The county expects $120.7 million rent and parking income in the first 40 years of the lease, which has two 20-year renewal options. Miami Wilds, which must invest $99 million, plans “a combination of debt and equity,” a memo from county Cultural Affairs Director Michael Spring said.

Talks of developing the land into a park attraction date from a 2006 referendum in which voters OK’d theoretical plans. Proposals then came and went, including one featuring 20th Century Fox characters and another with dinosaurs.

County negotiations with Miami Wilds began more than six years ago but stalled amid concerns the park would harm Pine Rockland land housing endangered flora and fauna. In response, Miami Wilds reduced its size to stay within an existing paved area.

“It checks all the boxes, addresses all the issues,” he said. “And it’s not like this project hasn’t gone through scrutiny.”

Construction should take “24 months after it begins in 2021, with a projected 2023 opening,” the project website says.

A water park is to feature “a lazy river attraction, wave pools, slides of all sizes, kiddie pools and a beach area for relaxing with shady landscapes.” A 200-room family lodge hotel is to be built in two $26 million phases. A “mercado” would offer restaurants and “an array of small unique retail shops [that] reflect the Miami Wilds and Zoo Miami outdoors theme.”

That combination of attractions and proximity to the zoo, Gold Coast Railroad Museum and Miami Military Museum will create “the type of place that parents and families will want to come back to more than once,” Mr. Zyscovich said in a promotional video.

Within five years of “substantial completion” or eight years after the lease begins, Miami Wilds must create 304 full-time-equivalent jobs paying more than $35,000 plus 99 more such jobs within five years of finishing the second phase of the family hotel or 11 years into its lease.

The project provides for $14 million-$15 million in improvements to the zoo parking area, including lighting, signage, security and drainage. Miami Wilds is to build at least 4,206 regular parking spaces, 90 bus spaces and Uber and Lyft accommodations.

It will come at a cost: for the first time, visitors will pay to park. Daily rates, Mr. Spring wrote, “shall never exceed $9 (in 2019 dollars) without prior written consent and approval by the county.” Miami-Dade expects a $1.53 million yearly cut of parking profits.

Miami Wilds may also decide to build a second luxury hotel on 39 more acres within a year of signing the lease. Mr. Lambert said group tourism from Europe will factor into whether his team taps that option.

“We’ll know in the coming months,” he said. “But there is a real opportunity there given the nature of this park.”