Advertisement
The Newspaper for the Future of Miami
Connect with us:
Front Page » Transportation » Freebee downtown service launch back on track for October

Freebee downtown service launch back on track for October 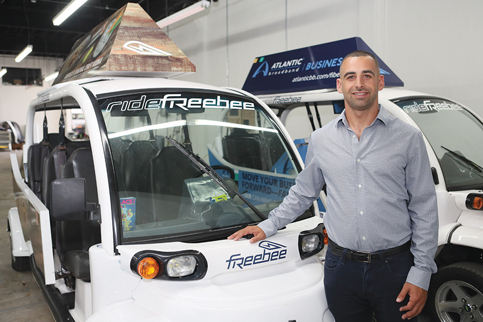 The coronavirus put the skids on a planned expansion of transportation service Freebee into the Central Business District of Miami earlier this year, to be funded by the Miami Parking Authority. But the launch is on again, tentatively, for the start of October, and authority officials are pleased to see the added service finally come to life.

The partnership has been years in the making.

As the new year began, Freebee’s free-ride service continued to expand as it partnered with municipalities and others across the county and beyond, including a long-sought agreement with the city’s parking agency to service the vital downtown area.

The authority is controlled by the Off-Street Parking Board, which in February unanimously approved a one-year pilot program with Freebee for three of the company’s electric vehicles to provide on-demand rides in downtown Miami. The authority agreed to pay Freebee $180,000 for that.

Alejandra “Alex” Argudin, the authority’s CEO, said it took nearly three years of discussions to establish a partnership with Freebee.

Ms. Argudin said there was interest because the service could help mitigate traffic downtown and provide a last-mile solution – a link between mass transit and passengers’ final destinations.

City leaders have been working for years to establish and improve those “last-mile” links.

The parking authority and Freebee were in the process of working on the nuts and bolts of the agreement when the Covid-19 outbreak escalated. At that point, both organizations saw it appropriate to postpone the launch date, according to authority spokesperson Margarita Rohaidy Delgado.

In a recent email to Miami Today. Ms. Delgado said: “The agreement is actually in place and will be executed once both organizations find it appropriate to kick off the program.”

She said the new estimated launch date is Oct. 1, if the Covid-19 situation permits it.

“I am confident that once we are able to launch the Freebee circulator in the downtown business district, it will help enhance connectivity and offer another micro-mobility option to the community,” Ms. Argudin said.

Available free of charge, passengers have three ways to access a Freebee car: through the Ride Freebee mobile app, calling a toll-free number or waving down a passing Freebee.

However, according to the parking authority’s agreement with Freebee, $48,000 of each vehicle’s operating cost will be subsidized by the authority’s guaranteed advertising revenue. While the vehicles will sport advertisements, the Freebees will also feature prominent parking authority signage.

As talks progressed, the authority considered up to five vehicles for the downtown area but settled on three for the pilot program.

The service area is to be bounded roughly by 11th Street on the north and the Miami River on the south, I-95 on the west and Biscayne Bay on the east. Documents show proposed operating hours from 10 a.m. to 10 p.m. seven days a week, but those hours could change.

The parking board was told the Freebee company will assume all liability, and the authority will have final say on advertising on the vehicles.

While Freebee was conceived under an advertisement model when it was founded in 2012, it has shifted away from that by teaming up with municipalities for funding. As a result, it has now become more of a public transportation option.

Though the partnership with the parking authority is new, Freebee’s presence downtown is not. The company has serviced downtown, as well as Brickell, Wynwood, Edgewater and the Design District, under the advertisement model.

The company also operates in Coconut Grove, Coral Gables, Key Biscayne, South Beach and Mid-Beach, and outside the county, including St. Pete Beach and Delray Beach.

The parking authority, officially known as the Department of Off-Street Parking, manages on-street and off-street parking assets in the City of Miami. The agency is self-sustaining and semi-autonomous, and financed by parking revenues.