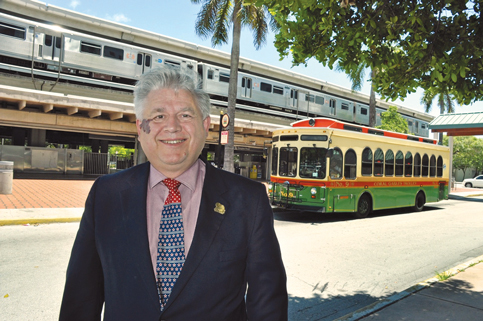 In order to offer Saturday service, the city is requesting $130,450 from the state annually for three years beginning in fiscal year 2021 (fiscal year 2022 for the state), a number that the city would match for a total yearly budget of $260,900 for the project. Expanded service, Mr. Kinney said, could begin as early as next summer.

“The Saturday extension of services will provide both commuters and residents with connectivity to the Miami-Dade Transportation System and provide improved access to employment and commercial areas,” the application states. “(It) will provide connectivity to the north on the Flagler BERT (Bus Express Rapid Transit) network and the Douglas Road Metrorail Station to the south. In addition, the project will service three transfer points with the City of Miami Trolley system.”

According to the application, the project would meet five key objectives that are of significance for the “local area:” 1. Fill the “first/last mile gap.” 2. Increase access to employment, recreational and cultural opportunities. 3. Facilitate access to regional transit options. 4. Reduce out-of-pocket transportation costs. 5. Allow residents and visitors to access service businesses without use of an automobile.

Project goals, the application states, are to achieve an average of 2,500 boardings on Saturdays (two-thirds of the weekday average) and “reduce (traffic) congestion in the Central Business District.

“Recently, we have been averaging approximately 1,200 passenger a day on the trolley,” Mr Kinney said.

The city’s second application, which addresses expanding evening service hours, would give more riders the opportunity to use the trolley at night, particularly second- and third-shift workers looking to commute via public transit. Specifically, the project seeks new service hours of 6:30 a.m. to 10 p.m., an extension of two hours nightly.

“The lack of evening service hours by the Coral Gables Trolley limits the ability of commuters and residents that need Public Transportation for their mobility needs,” the application states. “It is anticipated that increasing trolley service hours later in the evenings will allow a greater number of commuters and residents to utilize public transportation.”

To this end, the application requests a grant of $170,299 per year for three years, which the city would match for a total project budget of $340,598 annually, ideally beginning in 2021.