Advertisement
The Newspaper for the Future of Miami
Connect with us:
Front Page » Real Estate » Former Wynwood tow yard ticketed for new tower 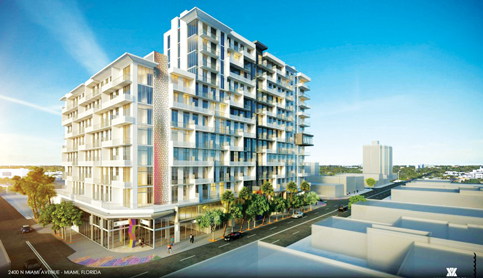 A developer has won positive reviews from City of Miami officials for a large mixed-use residential project in Wynwood.

The development would result in the reuse of the former site of the Downtown Tow Yard, which ceased operations several years ago.

The city’s Urban Development Review Board considered the project during a virtual meeting, and unanimously recommended approval, with a few recommendations.

It was the second virtual meeting of the board this year, due to the Covid-19 pandemic.

Parking will be on street plus an on-site enclosed garage, with a minimum of 229 spaces. Up to 17 spaces will be available for tenant bicycles.

Steven J. Wernick is the attorney for EEFC 2400 NMA Owner LLC, an entity affiliated with East End Capital Partners LLC, owner of the property which is in the Wynwood Neighborhood Revitalization District (NRD-1).

In a letter to the city, Mr. Wernick said the 2400 site, with three frontages between Northwest 24th and 25th streets along the west side of North Miami Avenue, comprises the majority of the former site of the Downtown Tow Yard.

“Taking cues from the spirit of Wynwood, the Applicant seeks to reimagine this former tow yard, previously closed off to the neighborhood and where few willingly set foot – now envisioning a vibrant, inclusive and secure environment for people to live, work, shop and play,” he wrote.

2400 N MIAMI AVE is proposed as a 12-story multi-family residential building, complemented by ground floor retail, and a sixth-story office component, with five levels of on-site enclosed parking and a mix of indoor/outdoor amenity spaces to support the building’s residents.

“The location and existing conditions of the Properties are a reminder of Wynwood as a former industrial district, and that large swaths of Wynwood are still awaiting reinvestment and redevelopment into the mixed-use neighborhood envisioned through the stakeholder-led Wynwood NRD-1,” Mr. Wernick wrote.

The 2400 site currently houses a handful of one- and two-story structures with roll-down shutters, with the bulk of the site being a gravel lot, formerly used as the tow yard, walled off from the surrounding streets.

Mr. Wernick said the surrounding area is a mix of former industrial uses and buildings that have been renovated and repurposed for commercial retail and office uses as Wynwood has evolved in recent years with the growth in tourism and adoption of the NRD-1 in 2015.

Of note, the Wynwood Arcade (owned by an affiliate entity of the applicants) is one block south of the project. However, there has been no new development on lots abutting the properties since adoption of the NRD-1, with exception of the Wynwood Square mixed-use project, under construction to the east of North Miami Avenue at 23rd Street, according to Mr. Wernick.

“The Project will bring a thoughtful and well-designed urban residential environment to revitalize one of the most important development sites located on North Miami Avenue, to implement the goals of the NRD-1 … to transform Wynwood from a former garment warehouse district to a mixed-use walkable neighborhood embraced by the [Business Improvement District] and stakeholders, where people can LIVE, work and play,” wrote Mr. Wernick.

He said the planned 236 apartments will include unit types ranging from small studios (360 square feet) to four-plus bedroom units on floors 7 to 12 (2,100-plus square feet), incorporating a mix of indoor and outdoor amenities on the ground floor and lining an expansive pool deck on the sixth story.

“With its three frontages, the Project will be a catalyst for future redevelopment in this section of Wynwood and well-timed to implement the proposed Wynwood Streetscape Master Plan and future improvements to N Miami Avenue & surrounding streets, providing the type of physical and social connectivity envisioned by the NRD-1 for the transformation of Wynwood from a gritty former garment and warehouse district into a mixed-use walkable neighborhood,” Mr. Wernick wrote.

The developer is requesting waivers that include:

■Up to a 30% reduction in required parking for projects near a transit corridor.

■ A 10% reduction in the aisle width, to establish a 22-foot width within the garage, where 23-foot is the standard width.

■A 10% adjustment to maximum floorplate length above the eighth story, to allow for 197 feet where 180 feet is otherwise permitted.

■The project technically provides 68.91% frontage at front setback and thus requires a waiver for a minor deviation from the 70% minimum frontage standard.

■A waiver for projection of rooftop elements.

■A waiver to permit four residential loading berths where two residential berths and one commercial berth are otherwise required.

Board member Robert Behar said, “The internal drive is very nice but I have a concern that all the function happens on the right-of-way.” He said the covered drive area is basically where the trash containers will be held and moved for pickup.

“Other than that, the project looks good,” said Mr. Behar.

“The project is very well developed,” said board member Anthony Tzamtzis, but he also voiced concern about a covered paseo that runs through the building.

“This through street is not a real pedestrian link. It’s a driveway. The main in and out of the building. I have an issue with that … I don’t know if that belongs there,” said Mr. Tzamtzis. “Having it as a pedestrian link would be magnificent.”

Mr. Karp said they are willing to reconsider the design and uses in the paseo.

Mr. Tzamtzis complimented the design and “playfulness of the balconies.”

Board member Robin Bosco said he appreciates the concept of the paseo and allowing some vehicular pass through, but he said it may be “a little confusing where you can walk and where you can drive.”

Mr. Bosco suggested a color scheme to mark where pedestrians can walk safely.

“Otherwise, I look forward to seeing this thing go,” he said.

Board member Dean Lewis said, “I want to compliment you for bringing this into Wynwood.”

Mr. Lewis recommended approval, recommending the developer’s team work on better articulation of the paseo, to “better harmonize with the pedestrian experience.”

Mr. Wernick said, “We can better articulate and define the pedestrian treatment within the paseo.”