Advertisement
The Newspaper for the Future of Miami
Connect with us:
Front Page » Top Stories » Barry University looks at delayed seasons, fanless sports 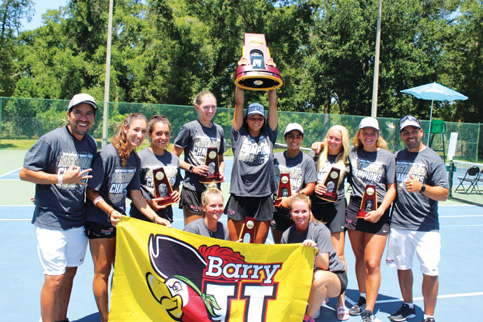 Barry University, a member of the NCAA Division II Sunshine State Conference, is hoping for a safe fall sports season and working within NCAA and public health guidelines to make it happen.

Barry’s director of athletics, Michael Covone, told Miami Today via email that the university was exploring options including delayed seasons and fanless games, but that it was too soon to know exactly what a fall season would look like.

Before the pandemic cut spring season short, the Barry Buccaneers appeared to be sailing to victory with six out of seven teams ranking top 10 at the national level.

The undefeated women’s tennis team was ranked number 1 nationally and looking to defend its NCAA title before being sidelined by the virus. Barry’s baseball, rowing, men’s tennis, and men’s and women’s golf teams were also nationally ranked, and Mr. Covone said the university remained committed to academic and athletic excellence.

When it comes to a plan for fall sports including men’s and women’s soccer and basketball and women’s volleyball, Mr. Covone said “everything is on the table.” Barry is currently working to follow Centers for Disease Control and Prevention guidelines, communicating with league officials and working with its university healthcare task force to determine the best way to move forward.

“Our goal this fall is for all our students to engage in their respective sports and activities to the fullest extent possible, with appropriate health protections in place,” he said. “Like most every aspect of life during the pandemic, it is safe to say that athletics will be different this fall. It is just too early to say exactly what that will look like.”

According to Mr. Covone, while most academic institutions are still working to understand the financial implications of the virus, one positive sign for Barry is that fall enrollment is in line with last year’s numbers. “That said,” he continued, “we are still [roughly two] months from the start of classes and since the beginning this has been a rapidly evolving crisis.”

Despite the uncertainty, Mr. Covone said he was confident in the school’s ability to thrive academically and athletically in the future.

“Coming into the pandemic,” he said, referring to the strength of the athletic program, “we were in a very good place, and that will serve us very well in the post-pandemic world.”

At the moment, the university’s athletic game plan sticks to the same principles as its overall plan. According to Mr. Covone, Barry is “being thoughtful and deliberate, and making decisions based on the very latest and best information available from public health experts.”

For the time being, this includes suspending university-sponsored travel and following an NCAA moratorium on in-person, off campus athletic recruiting.

Virtual recruiting has taken the place of in-person visits in many cases, though Mr. Covone said some prospective local athletes were allowed to visit campus in outdoor areas where social distancing is possible. Barry’s coaches are very busy recruiting and signing prospective athletes, he said, including many local athletes looking to transfer somewhere close to home.