Advertisement
The Newspaper for the Future of Miami
Connect with us:
Front Page » Government » PortMiami, cruise lines huddle as new sailings near 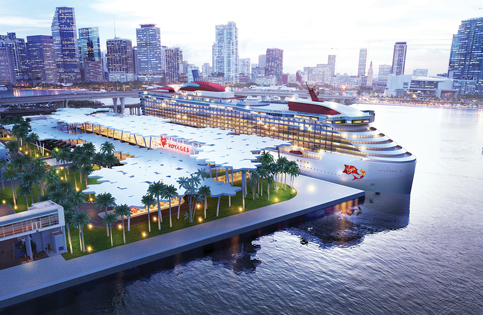 All eyes at the “Cruise Capital of the World” are on July 24, when cruise lines could again begin operations following a 100-day no-sail order from the Centers for Disease Control and Prevention (CDC).

In the meantime, PortMiami Director Juan Kuryla said Tuesday, the port is continuing talks with its industry partners to ensure that once that date – or any new one the CDC sets – arrives, passenger cruises can commence without a hitch.

“We have worked hard at the port, and our staff has done an incredible job, to make sure the port is ready to receive the ships once again,” he told Miami Today. “We’re still waiting to see how quickly the CDC allows the industry to come back and be operational and what guidelines the CDC and cruise lines agree to in terms of occupancy levels and any other protocols they establish together.”

“Should the cruise lines begin operating at 50% capacity by Aug. 1,” Mayor Carlos Giménez wrote in a memo last month, the losses since their operation stopped will be about $54 million.

“Those efforts, as well as a decrease of budgeted interest on its variable debt” and $11 million from the port’s unrestricted reserve will cover all but $6 million of the expected shortfall, the mayor wrote.

Other costs are harder to measure, Mr. Kuryla said, including the impact to a broad swath of interdependent industries, a significant part of whose livelihoods depends on a fully functioning cruise port.

“It’s such a wide net,” he said. “Let’s say we delay one project. That affects the construction industry and all the trades – carpenters, electricians, masons, marble and air conditioning guys – hundreds of thousands of workers and vendors who aren’t working now as a result of the cruise halt.”

Some work has continued, including construction related to four massive homeport deals the port struck with Carnival Cruise Line, MSC Cruises, Norwegian Cruise Line and Virgin Voyages last year that, together with another deal with cargo company Terminal Link, were projected to have a $7.8 billion impact here while creating 27,500 direct and indirect jobs.

The terms of those deals may change, as both the port and the companies exchanged force majeure letters calling on contractual clauses that free both parties from liabilities and obligations due to unforeseen circumstances. However, Mr. Kuryla said all will still move forward.

“They’re still going to come, and all the conversations we’ve had with every partner indicates that is so,” he said. “Miami is still their choice.”

Work on Virgin’s new terminal is already underway and will finish in November 2021. Talks with MSC, which signed 62-year berthing agreement with the port last year projected to yield the county $2.03 billion, indicate there may be changes to the deal’s terms, he said.

“We’ll see where that lands,” he said. “It’s been three very difficult months, but both the cruise and cargo industries are very resilient.”

On the cargo side, volumes in March through the port fell to 15.5% below last year’s levels. That figure only slightly improved to 15% below normal levels in April. Mr. Kuryla said the numbers from May will come next week, but he expects them to be much the same.

By September, however, the port should bounce back to levels it hit at the same time the year prior, he said, although volumes to and from Latin America and the Caribbean – the port’s largest markets – will continue to sag as a result of factories producing products still being closed.

“Some of the most popular Caribbean destinations, they’re just opening up, and that’ll ramp up slowly this summer,” he said. “It won’t be like one day to the next, where resorts in Jamaica or the Dominican Republic are [suddenly] operating at 100% capacity. That will take a bit of time.”