Advertisement
The Newspaper for the Future of Miami
Connect with us:
Front Page » Transportation » Electric cargo bicycles will roll through heart of Miami

Electric cargo bicycles will roll through heart of Miami

Written by Gabriel Poblete on May 19, 2020
Advertisement 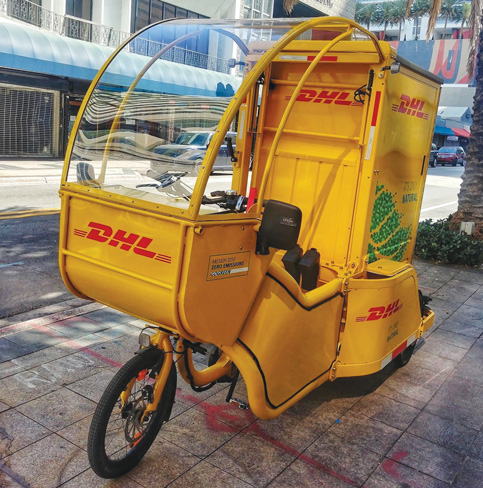 Miami’s bustling urban core will be the testing ground for electric cargo bicycles.

City commissioners last week approved a one-year pilot program for the e-cargo bikes, touting them as an environmentally friendly alternative to large trucks that will minimize downtown core congestion.

The program, sponsored by Manolo Reyes and Ken Russell, will be limited to downtown Miami, Brickell and the Coral Way corridor. Commissioner Reyes on Twitter announced that his initiative had won approval, saying the program “will have an important impact in improving the quality of life of our residents and business owners in downtown Miami reducing traffic and pollution.”

The Downtown Development Authority’s board of directors, which Mr. Reyes chairs, gave its nod of approval to the pilot program.

Shipping and courier delivery company DHL Express partnered with REEF Technology to deploy four e-cargo bikes for the program. A press release on REEF’s website says the three-wheeled cycles attach to a cargo container and can pull up to 400 pounds. The four e-cargo bicycles will lead to an expected reduction of more than 100,000 kilograms of greenhouse gases, the site says.

For the pilot program, a DHL straight truck will deliver up to nine cargo containers to the REEF hub, where the containers will then be connected to the e-cargo bicycles.

The cargo bikes will be limited to 20 miles per hour and may be used only to deliver goods, packages and services.

The bicycles are to park in loading zones where possible. When that option isn’t available, the bikes can temporarily park in bicycle parking areas on the sidewalk or street so long as they don’t obstruct rights-of-way or traffic and don’t reduce the width of a sidewalk to less than 3 feet, among other restrictions.

The Miami Parking Authority is to monitor compliance with the program.