Advertisement
The Newspaper for the Future of Miami
Connect with us:
Front Page » Government » Miami looks at trolley reorganization after coronavirus siege lifts 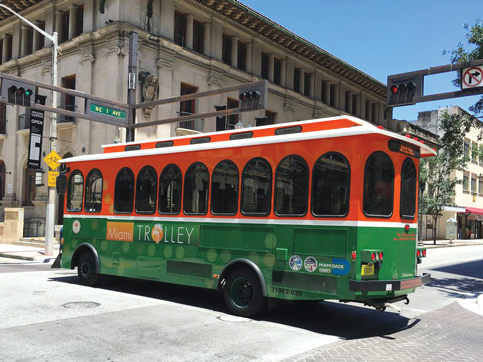 The reworking of the countywide transportation network is in its third phase, and the City of Miami administration has weighed in on the proposed realignment of its trolley system, albeit without much force.

In an interoffice memo, signed by City Manager Art Noriega and directed to Mayor Francis Suarez and commissioners, the administration makes no firm recommendation on the Transit Alliance’s proposed realignments of the trolley system. However, the memo states that before any changes, the city must have a grasp of what changes the county will be making.

Ultimately, any change to the city’s trolley system must be approved by the city commission.

While a discussion on the matter is scheduled for today’s (4/9) city commission meeting, it is to be deferred, said Azhar Chougle, executive director of the Transit Alliance, mentioning that the city is currently focused on responding to the coronavirus pandemic.

As mentioned in the memo, the benefits being touted by Transit Alliance’s network redesign include doubling the number of county residents with access to frequent bus or trolley service arriving every 15 minutes throughout the week, providing city residents 35% more access to jobs and services within 60 minutes of their home, and reducing the peak vehicle requirement in the city from 49 trolleys to 43.

The city’s trolley system currently provides 5.4 million rides a year across 13 routes that cover 120 miles of city roads. The program, funded with the half-cent tax, Florida Department of Transportation grants and advertisement revenue, currently has a $16 million budget that allows for 4,970 hours of total service by trolleys a week.

In contrast, the Transit Alliance’s realignment calls for eight routes that would cover 42 city miles. As characterized in the memo, the proposed routes are “more linear, generally aligned in a singular east-west or north-south orientation, without any neighborhood circulation as currently exists.”

Some of the proposed new trolley routes are the Second Avenue/Little Haiti route, which would offer a direct service from downtown to Little Haiti with stops along Midtown and Wynwood; a Brickell Trolley that would essentially combine with the Coconut Grove trolley; and a revised Liberty City route that would run between Biscayne Boulevard and the Joseph Caleb Center Court along 54th Street.

Among routes that would be eliminated are the Health District, Stadium and Biscayne routes, with those areas instead being served by other trolleys or county buses.

While the realignment is supposed to be cost-neutral, the memo identifies several fiscal considerations, such as $385,000 for relocating, removing and changing route signs. Benches and shelters are provided to the city by a private vendor, but the cost to remove or relocate them might not be covered under the city’s contract.

Throughout the memo, the administration also points to an efficiency study begun in 2018 that found that 77% of total ridership was concentrated in five routes. It also found that lower-performing routes tend to be more “complex or circuitous.” The study stated that service speed and efficiency could be improved by eliminating and consolidating unproductive stops and portions of routes.

Back in October, the Transit Alliance asked city commissioners to select one of two models as a part of its Better Bus Project: a ridership concept, which would prioritize just that, and a coverage concept, aimed at providing service to a larger swath of people. At the time, commissioners did not select either of the two, expressing support for a hybrid of the two concepts.

Mr. Chougle said the success of the city’s trolley program rework, as well as the county’s buses and Miami Beach’s trolley program, is a matter of cooperation among all parties. He stressed the importance of ridding redundancies across the county, saying it makes no sense to have two transportation programs service the same area.

The memo raises a potential equity issue, stating that because city residents will be served exclusively by buses or trolleys, some residents will have free transit whereas others will pay. However, Mr. Chougle said the reworked program would service low-income areas where reliable transportation was previously not available. He also said that right now, the matter of who gets free service and who doesn’t has been arbitrarily determined and even those who might have access to free transportation might not be able to get where they need to go under the current service.

“You can provide a free service that doesn’t take you many places. What transit is supposed to do is take you to a lot of places,” he said.

Mr. Chougle pointed out that while the city memo does not make a firm recommendation, it does acknowledge the current problems in trolley service. He said the administration has not just been supportive of the bus realignment but has also helped in designing the potential new trolley system.

“The City of Miami as a growing economic center cannot… afford to proceed without redesigning its trolley system,” he said.