Advertisement
The Newspaper for the Future of Miami
Connect with us:
Front Page » Government » School laptops fill a makeshift gap in Census efforts 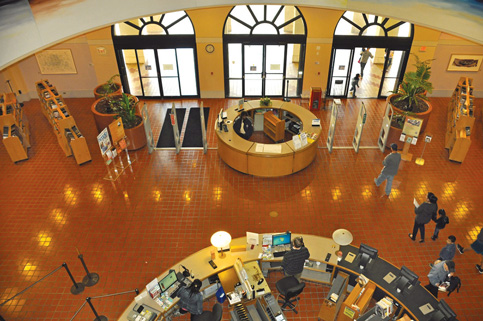 Miami-Dade’s efforts to count all residents in the ongoing Census are moving forward despite coronavirus-related difficulties, although adjustments are necessary to compensate for resources no longer available, local and regional leaders in the push say.

Among the resources temporarily lost are county, municipal and school libraries, upon which the county planned to depend to reach people without personal computers or at-home internet access, said Commissioner Esteban Bovo Jr., chairman of the county Census Task Force.

“Libraries was a big one, because we were hoping that if someone came up with the excuse of not having access to a computer that we would eliminate that,” he said. “It was significant, because it helped us deal with the low-income folks who might not have that connectivity.”

Fortunately, he said, many households with children now have a solution. Miami-Dade Public Schools sent more than 45,000 laptops and tablets home with students who didn’t have those of their own, and Comcast is giving those students and their families free web access.

The telecom is doing the same in Broward, whose school district also distributed devices to students in need.

“One of the things we may look at in communicating over the next weekend is, if you have a laptop at home and have connectivity because of the generosity of Xfinity and Comcast, by all means, use that laptop to fill out the Census,” he said.

While still fillable by phone or standard mail, the 2020 Census is unique because, unlike prior iterations, it prioritizes digital, web-based responses. That makes it practical and, in many ways, beneficial now, as many locations throughout the county have been closed to stem the spread of the virus. But it also makes reaching reluctant respondents harder, he said.

Following a discussion over the matter in late 2018, county lawmakers last year launched the Miami-Dade 2020 Census Task Force, an advisory board comprised of local officials and stakeholders from more than 30 organizations, from the public school district, United Way, Greater Miami Chamber of Commerce and the county elections department to the Homeless Trust, Archdiocese of Miami, Spanish American League Against Discrimination and several colleges.

The group’s objective is to engage all communities throughout the county in order to get a full population count, including tallies of immigrants, undocumented residents and their family members.

“It’s just so many folks that came together,” he said. “Miami-Dade County took this issue extremely serious. Since last year we’ve met, talked and came up with a game plan, and we’ve been executing that game plan. The only thing we didn’t consider in that was the coronavirus, and that’s thrown everything for a whack.”

The good news is that the rollout plan for the survey has a series of safeguards and reminder policies to ensure it gets as accurate a count as possible, said Marilyn Stephens, assistant manager for the Census Bureau’s Atlanta Region.

Between March 12 and 20, most households were to have received their first communication inviting them to go online or call a toll-free number to complete the survey. The bureau sent a reminder letter March 16 to those who should have gotten an invitation.

If residents fail to respond to that letter within 10 days, the bureau will send another reminder between March 26 and April 3.

“And if you’re so busy watching the news coverage of the coronavirus that you miss all three of those, we’ll send a fourth communication between April 8 and 16,” she said. “But this time the communication will have [the Census questions on paper] with the reminder.”

That way, Mr. Bovo said, respondents “can do it the way we’ve always done it, by mail.”

Around mid-May, if no executive orders or other emergency-related directives say otherwise, residents who still haven’t participated in the Census can expect knocks on their doors. In-person follow-ups were delayed, he said, due to coronavirus concerns and the call for widespread social distancing.

“They don’t want to have people going out, door-to-door, while most have been either self-isolating, quarantined or just decide to work from home while we get through this virus situation,” he said. “The goal here is not to have anyone come to your door. If someone’s knocking on your door, that means, heck, you’ve ignored five different letters sent to you, communications via text and all the avenues we’re going to be using to communicate with you.”

For respondents who have all the requisite information for everyone in their households as of April 1 – name, date of birth, length of residency in the home, relationship to other occupants and various demographic queries – the survey should take 10 to 30 minutes to complete.

Anyone not living in a household before April 1 should not be counted.

“Let’s say you had a newborn who was born on April 2. That newborn wouldn’t be on the Census,” she said, adding that while July 31 is the bureau’s deadline to collect answers, the goal is to get responses much sooner.

“We don’t even want people to think about waiting until July 31,” she said. “We want them to respond now, so we won’t have to follow up on that many households.”

The coronavirus has compound what was already expected to be an arduous undertaking, with many still wary to take the Census for various reasons or unable to be reached. But the county remains undeterred in its effort, Mr. Bovo said.

“We knew from day one that there could be a lot of excuses for people not to participate – trust in government, citizenship question and legal status here – but our thought is, first of all, it’s the law; you have to participate, and two, the information is protected,” he said. “And if there ever was a reason to participate, the coronavirus is it. A lot of the money we get into our community, which is funded through these formulas that are tied to population, this is a great reason why we should have funds come to our community. It would help fight this exact issue.”