Advertisement
The Newspaper for the Future of Miami
Connect with us:
Front Page » Communities » Green light on horizon for more downtown Miami parks 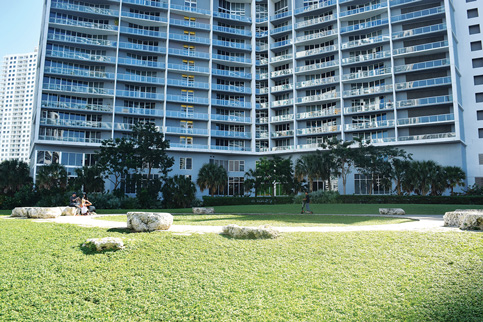 As more buildings go up and more people decide to live in the dense, vibrant neighborhoods of downtown and Brickell, residents’ call for more parks and open spaces could become all the more acute.

Now, a handful of projects in the pipeline, of varying ambition and scope, could transform the city’s downtown core, injecting additional green and open space into areas that have historically been an afterthought.

The Underline, a 10-mile linear park that will stretch from Brickell to Dadeland South, is making use of the land beneath the Metrorail. Several governmental agencies are teaming up to activate the space that’ll emerge after downtown’s I-395 signature bridge project is completed, with a 33-acre public space dubbed the “The Underdeck” providing interconnectivity to the two sides of the interstate that had long been partitioned by the highway.

Other projects are challenging what currently exists downtown, such as Biscayne Green, which would see lanes reduced on Biscayne Boulevard and parking lots in front of Bayfront Park and Bayside shuttered to allow the area to be transformed into a walkable, green open space.

According to a demographic study commissioned by the Downtown Development Authority (DDA), downtown’s residential base has grown by nearly 40% to 92,000, with the fastest-growing age group children 14 and under.
The authority is funded by a special tax levy on properties in its boundaries, which includes nearly all of downtown and Brickell as well as portions of the Omni District and Edgewater on the other side of the I-395.

“Although we do have beautiful parks in the area, the residents have overwhelmingly wanted more,” said Christina Crespi, the DDA’s acting executive director. “That’s why a lot of these projects that we’re working on… are so important to move forward.”

When it comes to park quality, the city ranked 54th among the nation’s 100 largest cities, according to the Trust for Public Land.

A nonprofit organization working to create parks and preserve public land, the trust annually ranks cities on what it considers to be the four important characteristics of an effective park system: acreage, investment, amenities, and access. The trust evaluates what areas of the city are in most need of parks when considering proximity, and downtown isn’t one of those areas.

The downtown area boasts two of the city’s largest green spaces, the 32-acre Bayfront Park and the 30-acre Maurice A. Ferré Park, formerly known as Museum Park and before that as Bicentennial Park before being renamed after the late Miami mayor.

As noted by Deputy Planning Director Jeremy Calleros Gauger, there’s “more density on the private properties in the more urban core, which means the public park spaces, the shared spaces, become much more vital in the urban core.”
He added, “That’s their only access to open space in a way that isn’t the case in the more suburban areas.”
Commissioner Ken Russell, whose district includes downtown and Brickell, emphasized the demographic changes in the urban core, saying Brickell has gone from a financial district to a residential area. He said his constituents have told him they want more parks.

The city receives park impact fees from development. He said that while those funds have gone to acquiring land for parks in other areas – mentioning the need for parks in other districts – obtaining land downtown is a challenge because of the higher cost of property.

“It is crucial that we invest in our green space in a creative way,” he said.

The first phase of The Underline, a half-mile called the Brickell Backyard, is to open this summer. The commissioner said the city has been able to divert funds from park impact fees toward that effort. According to The Underline’s website, the city funded about $6.5 million of the first two phases and has committed to up to $50 million toward the project.

Calling it his legacy project, Mr. Russell said he hopes to see the Miami Baywalk completed by the time he leaves office. When he was chair of the DDA, he said, he prioritized completing the pedestrian-friendly promenade that would run along the Biscayne Bay coastline from Margaret Pace Park in Edgewater to Brickell Bay Drive. The project is about 90% complete, according to the DDA.

Currently, the city and Florida Department of Transportation (FDOT) are in the visioning process of The Underdeck. Mr. Calleros Gauger said the city has had significant discussions with FDOT as the project starts to take shape.
Also partnering with the city are the Omni and Southeast Overtown/Park West community redevelopment agencies and the DDA.

FDOT selected Archer Western and The de Moya Group, as a joint effort, for the signature bridge, with an expected completion of 2024. The city has been engaging the community on Underdeck designs, Mr. Calleros Gauger said, as well as working on a proposed alternative, due at the end of March.

“It’s almost impossible to overstate how drastically different the ‘before’ and ‘after’ is going to be,” he said, adding that the area beneath the bridge will go from dirt embankments, physical barriers and about 800 support columns to nearly no solid embankment aside from the area where the ramps are and about 200 columns.

Another project that’s been gaining steam is Biscayne Green. As described by Ms. Crespi, the project would consist of “taking over the parking lots that are in the middle of Biscayne Boulevard, which Miami Parking Authority manages, and turning it into a pedestrian promenade, similar to Las Ramblas in Barcelona.”

Biscayne Green’s future now awaits a lane reduction study required by the Florida Department of Transportation, which manages the boulevard, to determine the feasibility of reducing lanes from four lanes to two.

While enthusiasm has been building around the projects, existing parks have been subject to speculation, particularly Bayfront and Maurice A. Ferré parks.

City residents, including the Downtown Neighbors Alliance, have voiced opposition to Bayfront Park being completely closed to residents for special events. Last July, the city commission approved the return of Ultra Music Festival, with Mr. Russell and Commissioner Joe Carollo, the chair of the Bayfront Park Management Trust, voting no.

“We don’t mind low-impact activity at our parks that would keep the parks open for enjoyment to the residents,” Downtown Neighbors Alliance President Amal Solh Kabbani said. “Where it gets frustrating is when there is an invasion of the entire space with no access at all to our children to enjoy the green space.”

She expressed concern over a recent closing of a portion of Maurice A. Ferré Park for a trailer showing of the latest “Fast and the Furious” film. She said the association strongly opposes development in or by the park, including a development that would see an observation wheel and residential tower installed in the pocket of water between the park and the AmericanAirlines Arena known as the FEC Slip.

“It doesn’t need to be an amusement park,” she said. “It needs to be green and that’s it, that’s the purpose of a green space.”

However, she was complimentary of the trust, saying it does the best with what it has.

Andres Althabe, president of the Biscayne Neighbors Association, whose members consist of residents on the north side of I-395, said the association has also objected to proposed development at Maurice A. Ferré Park.

The county had also contemplated using its property behind the AmericanAirlines Arena, formerly called Parcel B, for a Cuban Exile Museum. However, plans for the museum fell through and the park has since been renamed Dan Paul Plaza for the late environmental lawyer and one of the architects of the county’s Home Rule Charter in the 1950s.

A conservancy has been proposed for Maurice A. Ferré Park, with Sonia Succar Ferré, granddaughter of the late mayor, saying that a governing body dedicated to the park would help fend off development interests and raise funds for the maintenance of the park. The conservancy would probably have to pass a voter referendum.

Jose Solano, executive director of the Bayfront Park Management Trust, said by email that the trust has been able to operate as a self-sustaining agency, without a dollar from the city, while saving the city nearly $8 million in recent years by not subsidizing the park’s operations.

Bayfront Park currently must remain open to the public 85% of days yearly, although that doesn’t apply to the special-purpose facilities, such as the amphitheater or vessel docks. The city commission can waive the reservation of park use for temporary events or for specific events if it’s in the city’s best interest.

“The Trust’s success is the city’s success,” Mr. Solano wrote. “And, that success is a direct result of the social entrepreneurial model that has guided our operation for the past 15 years – our mission is to create social value.”

Residents have criticized the maintenance of Parcel B; an email exchange with the county parks department’s information officer affirmed the property is managed by the county’s Internal Services Department and is not considered park property.

Similarly, improvements to state-operated Miami Circle Park, at the mouth of the Miami River, had suffered a setback after Hurricane Irma in September 2017. The park is home to artifacts of the Tequesta Indians.

She said area residents have expressed a desire for more parks, often sending emails to her department suggesting potential park space the city could acquire. Those emails are forwarded to the Department of Real Estate and Asset Management, which determines the feasibility of acquisition.

Because not much can be done to increase the number of parks in the area, her department has focused on increasing the quality of existing parks. She said the planning department advocates for additional green open spaces in proposed developments.

“I think a lot of the projects that are already on the way are offering the opportunity to dream of a different way of using parks and connections,” she said. “It’s about embracing the idea of having multiple parks as part of that recreation destination.”

The success of several of the projects hinges on buy-in from developers and the rest of the private sector. For Miami Baywalk, as well as the Riverwalk that’ll run along the Miami River, private property owners have granted public easements.

Meg Daly, the founder of Friends of The Underline, has witnessed her idea of creating a linear park beneath the Metrorail become reality. The first and second phases, both in the city, are fully funded, as is the fifth phase in Coral Gables. She chalked up the success of The Underline to the joint efforts of Friends and the leadership of elected officials.
The Underline has been able to get funding from all levels of government as well as the private sector, totaling about $100 million since its inception. She said the success of The Underline has evidenced that parks need not necessarily come from the public sector.

“This is something that everyone’s been able to get behind and I think the collision of “yes” is what has got us there so quickly,” she said.

A walkable and bicycle-friendly 10-mile linear park, The Underline will also feature nodes of activity along the way, with outdoor gyms, event spaces and more. It’ll be adorned with canopy trees, a butterfly garden and landscaping along the path.

Ms. Daly stressed the importance of parks for both physical and psychological health and said Miami is having a golden moment, commending several other projects that are prioritizing green space: “I think great cities are defined by great parks.”