Advertisement
The Newspaper for the Future of Miami
Connect with us:
Front Page » Government » Some downtown don’t welcome scooter rental craze 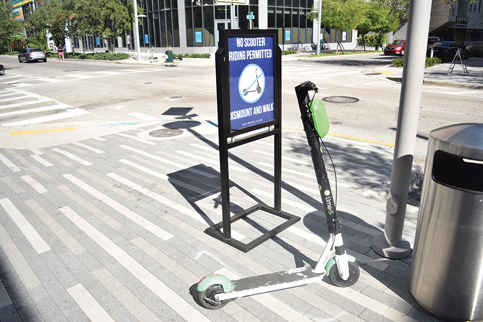 Electric-scooter riders are still traversing areas in the City of Miami, and potentially no other area in the city sees more activity than the downtown core.

Scooters have long been seen as a solution for the last mile, vehicles that can facilitate the transition from one’s home to a mass transit option. They’ve been hailed as an alternative to daily car driving, helping mitigate traffic congestion and providing an eco-friendly method of transportation.

However, not all city residents are sold, with many saying that the benefits don’t outweigh the shortcomings.

The City of Miami instituted its electric scooter pilot in April of last year. Today, nearly 4,000 scooters are permitted, with nine vendors operating in the city. The scooter pilot is restricted to District 2, Commissioner Ken Russell’s district, the waterfront area that stretches from Coconut Grove to Morningside and includes Brickell, Downtown Miami and Edgewater.

Andres Althabe, president of the Biscayne Neighborhoods Association, opposes the scooter pilot in its current state, preferring it be done away with for a year, rather than continuously extending the pilot, to allow the scooter vendors to work out some of the pressing concerns.

The Biscayne Neighborhoods Association’s membership is open to those who live roughly between the  I-395 and the I-195 and the waterfront and North Miami Avenue.

While several of the association’s members like the scooters and use them, he said, the majority “hate them. They don’t feel comfortable walking on a sidewalk that is overpopulated with scooters and bicycles.”

He said the scooters are littered on the sidewalks, obstruct access for the handicapped and are being used at dangerous speeds on sidewalks. When asked if he believes they are minimizing congestion in his area, he pointed to the need for better mass transit, saying scooters aren’t the solution.

“The government is going to have a create and subsidize public transportation,” he said.

City commissioners by a 3-2 vote recently extended the scooter pilot through April 15, with a new ordinance expected to be rolled out in coming meetings. The city has also moved forward with a solicitation that would see the reach curtailed to 2,499 scooters, to be split evenly among no more than four vendors.

The solicitation establishes a criterion to rank the vendors, with 30 points out of 100 geared toward safety. The move is intended to incentivize vendors to find creative solutions to make scooter riding safer in the city.

Though minors aren’t allowed to ride scooters, it continues to be a problem. City residents have also voiced their concerns with scooter users riding recklessly on sidewalks.

Amal Solh Kabbani, president of Downtown Neighbors Alliance, says the scooters have something to offer in downtown: “They are eco friendly, they are definitely convenient for Downtown Miami lifestyle.”

But she, too, is wary of the pilot program. She said the neighborhood group is being patient as additional safety features are implemented to prevent underage riding and more than one rider from boarding a scooter. She would like the scooters to not clutter the sidewalk and to be parked in a way similar to the bicycle sharing program.

“If they’re going to keep giving us Kool-Aid and there’s no regulation, at some point something’s got to give,” she said.

Commissioner Ken Russell has championed the scooter pilot but has acknowledged safety concerns must be mitigated if the program is to become permanent. He said the request for information will incentivize vendors to make their service as safe as possible if they want to continue operating in the city.

“It’s been a growing pain with scooters,” with the homeowner and neighbor associations not on board with the pilot, Mr. Russell said. With 7,000 scooter rides a day, he said, those who are riding and benefiting from the pilot, such as college students and young business people, are not as vocal. However, he said, he remains optimistic.