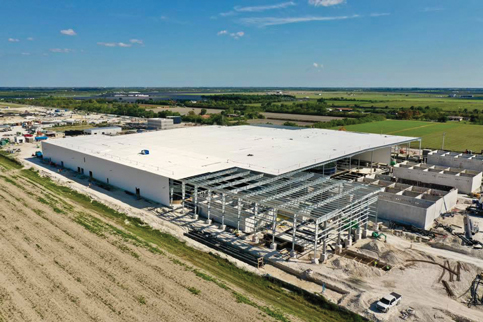 Still on schedule to finish by July the first of three stages for building its sprawling Redland facility, indoor fish farming company Atlantic Sapphire wants $5 million in public funds to start the next phase.

Miami-Dade commissioners Wednesday (2/19) were to have considered the funding request. If approved, the county would disburse the money over 10 years through its Targeted Jobs Incentive Fund Program.

The Beacon Council on Nov. 5 applied on behalf of Atlantic and included benchmarks the company must meet.

Atlantic plans to build a new 1.1-million-square-foot facility to house a manufacturing and fish-processing plant, engineering services and world headquarters. It would rise near an existing 390,000-square foot facility just outside Homestead General Aviation Airport. Construction would begin this year and end in 2022.

The existing facility contains the company’s climate-controlled “Bluehouse” tanks, which simulate the 20-month spawning and growth process of Icelandic- and Norwegian-sourced salmon.

Once Atlantic finishes all three phases of the project, Miami-Dade will be home to “the largest aquaculture facility in the world,” according to company CFO José Prado.

In a May statement to the Oslo Stock Exchange, Atlantic announced plans to increase its harvest volume from 90,000 metric tons to 220,000 metric tons – more than half the total US consumption of the fish, according to figures in a 2018 National Oceanic and Atmospheric Administration fisheries report.

“They’re dealing with untreated fish waste in the bays. The fish are exposed to disease. They escape. [There are] lots of micro-plastics,” he said. “With Atlantic Sapphire’s method, all of this goes away.”

As a condition to receive the $5 million incentive, Atlantic would create 237 new jobs, each paying an average annual salary of $60,000 not counting benefits. Application information from the company shows a planned per-person annual employee benefit package of $11,500.

The company is to add 97 new jobs this year, 64 jobs in 2021 and 76 in 2022. All 54 current positions will remain, the company said, and those employees will continue to be paid in accordance with the county’s living wage ordinance – a minimum $17.06 hourly or $13.61 hourly with qualifying health benefits valued at least $3.45 per hour.

In a memo, Deputy Mayor Jack Osterholt wrote that Atlantic is considering alternative locations in Georgia, Texas and Maine. He did not elaborate as to what the company would do with its current facilities and investments here if it chooses to relocate.

Through 2031, he wrote, Atlantic will make a total capital investment of $340 million and is estimated to generate $11.2 million in incremental property tax revenue for the county.

“Therefore, the Beacon Council projects that the county will realize a positive fiscal impact of $6.2 million over the 10-year period of the [Targeted Jobs Incentive Fund Program] award,” he wrote.

Miami-Dade would pay the company $296,000 yearly for the first nine years of the decade-long incentives disbursement. A $2.04 million bonus, equal to 0.15% of the total capital investment for every 50 jobs created, would then kick in for a 10th-year payment of $2.336 million.