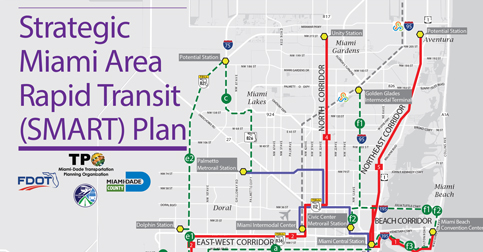 With a final vote on Transit Alliance Miami’s redesign of the Metrobus network expected by June, the nonprofit has set its sights on auditing the Strategic Miami Area Rapid Transit (Smart) Plan.

They sold it as way to keep a promise made when voters in 2002 OK’d a half-penny tax to expand transit countywide. In 2009, the county diverted the tax amid the Great Recession to maintain the existing system.

County decision-makers have so far selected modes for just half the Smart corridors. Only one has attracted outside funds.

That deficit, said Transit Alliance Director Azhar Chougle, shows a lack of faith in the plan that needs addressing.

“Staff and commissioners won’t admit it in public, but there’s very little confidence in the Smart Plan,” he said. “What was promised to voters in 2002 was unrealistic, and what is being promised again is the same plan with the same disregard for the realities of current land use, available funding and what makes effective transit. Our first step is to take a deeper look at how this process is being run and what the numbers add up to so far.”

Another initiative the group is launching should inform that effort: a probe of how transit would operate if, like other metropolises, it was run by a transportation authority staffed and run by experts.

Transit here now is part of a strong mayor county administration. It operates at the direction of the mayor and 13 commissioners, who make up more than half of the county transportation planning board.

The mayor and commissioners also appoint all but one of the 15 citizens who oversee the use of half-penny funds.

“Transportation authorities are depoliticized,” Mr. Chougle said. “What is in place now is not normal.”