Advertisement
The Newspaper for the Future of Miami
Connect with us:
Front Page » Transportation » Miami-Dade targets five 2020 transportation milestones 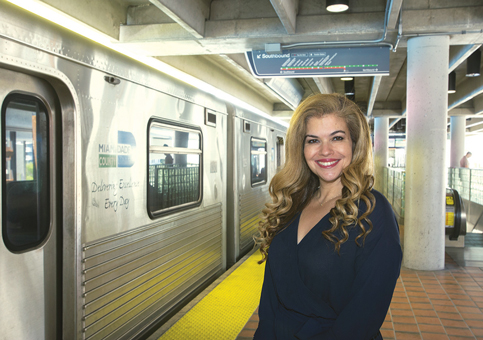 Work to improve mobility in Miami-Dade is ongoing, and according to Transportation Director Alice Bravo, travelers here can already expect the county to reach five major milestones before the year is over.

“First things first, we’ll be completing the delivery of all the new railcars for Metrorail by spring,” she said. “By then, we’ll have received the next 120 CNG buses [the county bought, which will] bring us to 420. More than half our Metrobus fleet will be new, with more to come.”

Next, she said, is further progress on the Strategic Miami Area Rapid Transit (Smart) Plan, which lawmakers here adopted in 2016 to study six key commuting corridors throughout the county in order to select appropriate transit modes and attract federal and state funding.

Two of those corridors – the South Dade Transitway and Beach Corridor – are “in some form of procurement,” she said. “Then, [for the Northeast Corridor], we’re working on the Aventura station [with Brightline]. I think that’s a huge milestone.”

Ms. Bravo clarified that while the county board in charge of endorsing transit modes for the Smart corridors hasn’t yet chosen a solution for the Beach Corridor, which is to run between downtown Miami and South Beach, the county administration is working on a “parallel path” by seeking competing bids to an unsolicited proposal for monorail that Malaysian casino giant Genting submitted last year.

“There’s the [Smart Plan] study that started in earnest in 2017, the traditional process where you pick a [locally preferred alternative] if you’re pursuing federal funding,” she said. “On the other side, we received an unsolicited proposal and issued [a request for proposals], so if that process yields a viable solution that is cost-effective and doesn’t need federal funding, that’s one path. But as a fallback position, we haven’t slowed the traditional process in any way.”

In September, Miami-Dade ordered its first 33 electric buses of up to 75 possible from Burlington, CA-based manufacturer Proterra – one of the largest domestic purchases of e-buses so far.

“We’re looking forward to receiving those this year,” Ms. Bravo said. “They’re very quiet, so ideally we’d put them in areas that are most noise-sensitive, but we basically want to spread them throughout the county. That’s how we get feedback on how they perform under different conditions.”

By early June, the Miami-Dade County Commission is likely to vote on the final version of Transit Alliance Miami’s Better Bus Project, a comprehensive redesign of the countywide Metrobus route network that kicked off last year.

Ms. Bravo said she agrees with Transit Alliance Director Azhar Chougle’s estimation that it will then take another six to nine months to fully put the redesign into action.

“Once we have approval, there’s a whole process we go through – planning the operations of the routes, [assigning routes to] individual drivers – and it has to happen before we implement the changes,” she said. “We have a contractual process with the unions, with specific timelines, so that bus drivers have an opportunity to pick the routes they’re going to drive.”

This summer should also see completion of Phase I of Brickell Backyard, the first half-mile of a planned 10-mile linear park called the Underline.

County commissioners in October 2018 approved an agreement to use $14.2 million in state, county and City of Miami funds to build Brickell Backyard at the northernmost point of the Underline, which runs below the Metrorail line.

“That’s [the] first segment,” Ms. Bravo said. “We’ve been thinking about the Underline for several years, so having this piece completed speaks volumes to the potential of the rest of the corridor and provides the energy and momentum to keep the rest of that going. Seeing is believing.”